There has been an increase, since 2014, in the number of uncontrolled movements of rail cars, the Transportation Safety Board of Canada warned Wednesday. 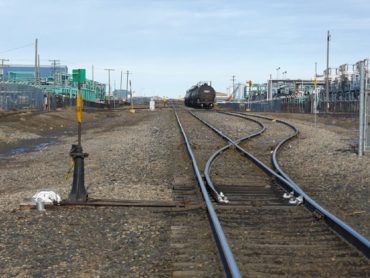 TSB released Wednesday a report into an incident in 2016 in which a tank car rolled away from loading tracks at refinery complex northeast of Regina.

The equipment was operated by Cando Rail Services, which is contracted by Federated Co-operatives Limited’s Co-op Refinery Complex to conduct switching operations. The complex is northeast of Regina.

Shortly after 11:30 p.m. March 1, 2016, a crew left a tank car unattended while switching cars on the loading tracks at the refinery. The car was loaded with asphalt. The air brakes bled off and the car rolled, uncontrolled, more than four kilometres into the city, crossing seven public roads. There were no injuries and no products were spilled.

In its investigation report, TSB – a separate organization from Transport Canada that investigates incidents in aviation, marine, pipelines and rail – released four findings as to risk.

“If rules or instructions permit the use of air brakes alone to secure rolling stock left standing in a yard, there is an increased risk of rolling stock running away uncontrolled,” TSB said.

In 2015, Transport Canada issued Rule 112 in the Canadian Rail Operating Rules. That rule was intended to put in place additional physical defences to prevent runaway equipment – a recommendation TSB made in 2014. That recommendation was made in an investigation report into the Lac-Mégantic, Quebec tragedy, in which an unattended crude oil freight train operated by Montreal, Maine and Atlantic moved downhill into the town. The explosions and fires resulting from the derailment killed 47.

MMA “never assessed the risks of leaving a train carrying crude oil unattended, on a downhill grade, with no other precautions taken to prevent the train from running uncontrolled, other than the assumed correct application of the handbrakes,” Don Mustard, senior investigator for rail and pipelines at TSB, said in a presentation, in October, 2015, during the the Annual Engineering Insurance Conference.

“Although railways have special instructions requiring the use of hand brakes in yards, as written, the revised CROR Rule 112 appears to permit the use of air brakes alone to secure rolling stock in yards,” TSB said in the report. “Freight car air brakes are known to leak, and the rate of leakage is generally unpredictable.”

TSB added that the number of incidents involving uncontrolled movements has increased from 31 in 2014 to 42 in 2015, with a five-year average of 39.

“This suggests that more still needs to be done to ensure that the risk of such occurrences is reduced and appropriately mitigated,” TSB said.

In 2013, there was no specific limit of insurance that Canadian railway operators were required to buy. At the time, the Canada Transportation Act required anyone wanting to build or operate a railway line under federal jurisdiction to apply to the Canadian Transportation Agency, a quasi-judicial agency, for a certificate of fitness. Those certificates would be issued if CTA was satisfied that there would be “adequate third party liability insurance coverage.”

Since 2015, with the passage of the Safe and Accountable Rail Act, rail operators carrying “significant volumes of dangerous goods” now require $1 billion in insurance limits, including coverage for the risk associated with a leak, pollution or contamination.

Shortly after the Lac-Megantic accident, a vice president at Marsh Canada told Canadian Underwriter that toxic inhalation hazards, rather than crude oil, actually presents “the greatest risk from an insurance carrier’s perspective.”

In January, 2005, three chlorine tank cars derailed after a train encountered an improperly lined switch near Graniteville, South Carolina. Nine people, including the engineer, died of chlorine gas inhalation, while more than 554 others were taken to local hospitals.

In November, 1979, more than 200,000 people were evacuated west of Toronto when a Canadian Pacific train hauling various hazardous and flammable substances derailed near Mavis Road and Dundas Street in Mississauga. Three propane cars exploded and a fourth car, containing chlorine, was breached. No casualties were reported.