Volcanic eruption could cost large cities up to US$30 billion, new Swiss Re model says

Total economic losses from volcanic eruptions could cost large cities up to US$30 billion, according to a new volcano model from Swiss Re. 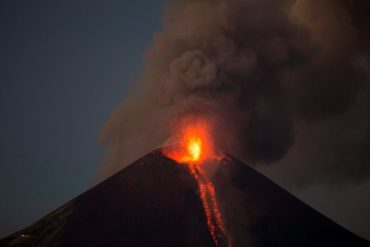 The Momotombo volcano spews a large plume of gas and ash as well as glowing rock, as seen from the rural community of Papalonal, in Leon, Nicaragua, Wednesday, Dec, 2, 2015. Quiet for many years, the volcano emitted some glowing rock on Wednesday, after gas and ash emissions began Tuesday. In 1610, the city of Leon was destroyed during an eruption of the Momotombo and was relocated west, where it is currently located. (AP Photo/Esteban Felix)

Calling it the “world’s first global volcano model,” the probabilistic model assesses risk in the case of more than 500 active volcanoes and enables insurers to quantify volcanic risks and to calculate expected losses from volcanic eruptions. More than one billion people live within 150 kilometres of an active volcano and one in seven of the world’s largest urban areas are located within the radius, Swiss Re said in a press release late last week.

“A missing global model in the insurance market has been the greatest obstacle for addressing the risk posed by volcanic hazards,” Swiss Re said in the release, noting that in some countries, the volcanic threat constitutes a substantial part of the insurable risks, and the ability to assess and price such risks with precision is crucial.

Emerging markets such as Nicaragua or Ecuador would suffer severe economic disruption in case of eruption, Swiss Re noted. 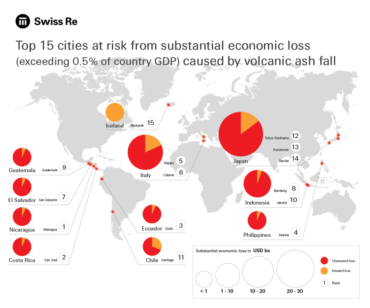 Losses from volcanic eruptions are still largely uninsured, posing a significant protection gap, the reinsurer said. “As global urbanization gathers pace, the protection gap for volcanic hazards widens,” said Jayne Plunkett, CEO of Reinsurance Asia at Swiss Re. “But economic disruption and large-scale economic losses for people and businesses locally are only one part of the picture. For example, in the case of any large scale eruption, supply chains would be affected all around the world, causing both economic and insured losses.”

Currently, only Iceland has compulsory volcano insurance, the reinsurer said. Elsewhere, losses from volcanic eruptions are largely uninsured, but the precise quantification of volcanic risks will enable adequate insurance coverage.

“The new model allows us to calculate premiums for this important risk for individuals, businesses and countries,” said Martin Bertogg, head of catastrophic perils at Swiss Re. “It’s now up to us in the insurance industry to use this new opportunity, together with all partners, to design trustworthy and affordable coverage to help make the world more resilient when disaster strikes.”