A voluntary evacuation of homes and cottages in southern Manitoba near the Ontario border remains in effect several days after a heavy rain event caused flooding and road washouts. 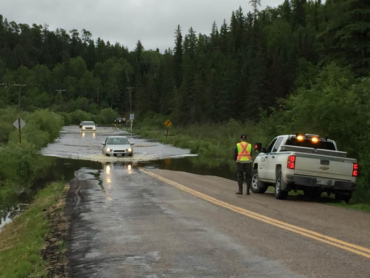 A number of regional roads in West Hawk, Falcon Lake and the Whiteshell areas remain flooded or damaged:

High water levels are affecting boathouses and docks along shorelines in the south Whiteshell area, MSD added in the release. As well, water may have reached two cottages on Caddy Lake and “efforts have been made to contact the owners.”

Officials are waiting for the water to recede in many areas before repairs can begin, the release said, noting that it is too early to provide cost estimates until the full extent of the damage is revealed by receding water.

MSD said in a statement on Sunday that “heavy rains and resulting high water” had caused deteriorating road conditions, leaving cottage owners stranded with only boat access until road repairs could be undertaken. “Anyone who has experienced damage is encouraged to contact their insurance providers to determine their coverage,” the statement concluded.

About 15 guests at Penguin Resort left Sunday without their vehicles after road washed out on Falcon Lake #cbcmb pic.twitter.com/0x8Ed9ZFgX

An amazing amount of water fell in Falcon Lake. This is the road leading to the South Shore – it was impassable. pic.twitter.com/nogcdOOlwg