In the wake of the tornadoes that struck the Ottawa-Gatineau region Sept. 21, the Insurance Bureau of Canada (IBC) has raised another concern: contractors misrepresenting themselves or offering extensive fees for services.

One restoration firm representative noted large-scale disasters can attract people looking to take advantage of the situation. He offered some tips to differentiate legitimate contractors from unscrupulous fraudsters.

Pete Karageorgos, director of consumer and industry relations with IBC, was in Ottawa to survey the damage caused by an EF3 tornado that did severe damage in Dunrobin, Ont. He told Canadian Underwriter Friday about a homeowner who said they received an “unexpected door knock.” It was a person claiming to be a contractor offering a price of $40,000 to remove some trees. Luckily, it didn’t appear the victim paid. 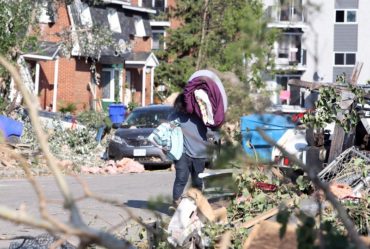 A man carries some belongings as residents were permitted into their houses and apartment buildingsin Gatineau, Que. on Monday September 24, 2018 after a tornado caused extensive damage Friday to a Gatineau neighbourhood forcing hundreds of families to evacuate their homes. THE CANADIAN PRESS/Fred Chartrand

Karageorgos said he has heard of other instances in which somebody knocked on a homeowner’s door claiming to be a contractor. They may have notice missing shingles on a roof or a damaged eavestrough and offer cash to fix them.

“The damage wasn’t too big,” Karageorgos said. “They would ask for some payment up front so they could go get some materials and then they disappear. Occasionally when these events occur we see there are people who want to profit from it and defraud people by inflating prices.”

Shane Swinson, senior vice president of restoration firm FirstOnSite’s insurance portfolio, said the Ottawa area tornadoes resulted in an extreme demand for contracting and restoration services. Consequently, he said, industry has seen people knocking on the doors of homes and businesses “looking to fill in for overtaxed restoration companies. Some are legitimate contractors, but not all, and can run the gamut from incompetent to outright fraudulent.”

Swinson offers the following tips for homeowners to check the legitimacy of a contractor or to ensure they aren’t misrepresenting themselves:

In the case of the Ottawa-Gatineau tornadoes, the City of Ottawa issued a tweet Sept. 26 warning residents in tornado-affected areas there have been reports of “recovery companies misrepresenting themselves.” It recommended homeowners speak with their insurance companies about authorized work and to be vigilant of these potential scams.

“Work with your insurance adjuster,” Karageorgos advised. “Don’t sign a contract from somebody who hasn’t been referred to you [or] someone who you haven’t worked with before.” Work with a contractor you may have experience with, or with the insurance company’s suggested vendor.