Water level detectors in all below-waterline compartments should be mandatory for large fishing vessels: TSB

More than 26 years after the fatal sinking of a leaking fishing vessel north of Nova Scotia, the federal government has still not mandated water level detectors on all large fishing vessels, the Transportation Safety Board of Canada warned this week. 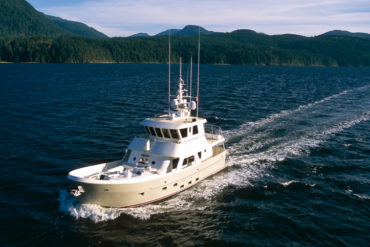 On Dec. 12, 1990, the Nadine, a 37-metre long stern trawler, left Cap-aux-Mweules, Quebec to fish near Cape St. George, Newfoundland, TSB said in a report released in 1994. On board were nine crew plus a marine biologist with the federal fisheries and oceans department. The Nadine sank Dec. 16, 1990 in the Gulf of St. Lawrence about 70 kilometres northwest of Cape Breton Island. Only two were rescued. Another two were missing and the remains of six were recovered.

In its investigation report released in 1994, TSB recommended that Transport Canada “require the installation of water level detectors in all compartments below the waterline on large fishing vessels.”

The Nadine had a leak “of unknown origin,” TSB reported in 1994, adding that two days after it left Quebec, the chief engineer had pumped out the lazaret and “retightened the stuffing box of the rudder stock.”

The vessel sank because water was “able to enter the vessel and eventually flood the lazaret, the fish holds and the engine-room,” TSB said in its report. “This ingress gradually reduced the vessel’s stability until all reserve buoyancy was lost and the vessel sank.”

In January, 1995, TSB reported that Transport Canada “will require high water level detector alarms to be fitted in all compartments below waterline.”

But six years later, TSB reported that Transport Canada was “concerned that any gains, which may be achieved by requiring the installation of water level detectors in all compartments below the waterline, may be offset because of practical problems regarding the physical protection of water level detector transducers and the subsequent potential for generating false alarms.”

TSB has assessed Transport Canada’s response as “satisfactory intent.” TSB is a separate agency from Transport Canada that investigates incidents in marine, aviation, rail and pipelines.

Commercial fishing safety is one of the 10 issues on TSB’s most recent watch list, announced Oct. 31, 2016. The watch list is comprised of safety issues that TSB says needs to be addressed.

The previous watch list had eight items, one of which was loss of life on fishing vessels, TSB said in July, 2016 in its annual report to Parliament.

“The fishing community does not yet have a strong safety culture although there are encouraging initiatives across Canada with the continued promotion of local governance,” TSB said in in 2015-16 report to Parliament. “Over the last several years, the TSB has reported that the lack of personal flotation device usage, lack of emergency preparedness, and lack of risk assessments have all contributed to recent fishing fatalities.”

This past October, TSB reported that fishing safety has been on the watch list since 2010.

In 1993, TSB recommended that the government change the Small Fishing Vessel Safety Regulations to require “carriage of anti-exposure worksuits or survival suits by fishermen.” That recommendation came from an investigation into another fatal accident from December, 1990.

On Dec. 17, 1990 the Straits Pride II fishing vessel capsized off Canada’s east coast. A chain attached to the port paravane broke during high winds and rough sea conditions. Three crew members were able to board the life raft, which blew away from the other three crew members – one of whom drowned and two of whom died from hypothermia. The Straits Pride II had no anti-exposure worksuits or survival suits and was not required by law at the time to have them.

TSB has assessed as unsatisfactory the response from the government to a recommendation – made in 2004 – that safety management systems be mandatory for small passenger vessel enterprises. That recommendation was made in TSB’s investigation report into the fatal sinking in 2002 of the Lady Duck amphibious vehicle, in the Ottawa River near the Hull, Quebec marina.

“Safety management systems have not yet been mandated in all sectors of the transportation industry,” TSB chair Kathy Fox stated in October 2016.

In March, 2013, Transport Canada  “advised TSB that the proposed Safety Management Regulations” would not be applied to vessels less than 24 m in length and carrying fewer than 12 passengers, TSB stated.