Threats are being lobbed at auto insurers by an Ontario member of parliament who indicated that insurers not offering satisfactory relief measures could be called out and face repercussions.

In the latest salvo from Ontario Finance Minister Rod Phillips — who in April said insurers should provide relief on the basis that people are driving less and that are facing financial hardships elsewhere — he told CTV News in an interview this week that insurance companies that don’t offer reductions could face penalties.

“Some are participating and taking care of their customers and some are not,” Phillips said. “We are not taking anything off the table. We want to see action and we’ve seen some.”

Financial Services Regulatory Authority of Ontario issued a release Wednesday in which it encouraged auto insurers to explore further relief measures. So far, $685 million in relief has been made available to Ontario drivers ($220 million from Mar. 1-Apr. 30 and $465 million planned since May 1), it said in a news release. That amounts to about almost 5% of total annual premiums paid by 70% of Ontario policyholders, FSRA said.

“This is real, tangible support for Ontarians who are focused on supporting their families and businesses during this uncertain time,” Insurance Bureau of Canada said in a statement to Canadian Underwriter of the amount returned to Ontario drivers.

However, FSRA noted, different insurers are offering different levels of relief — something Phillips noted as well. “I don’t believe all of the companies are participating at the level that they should,” he told the Canadian Press in an interview.

“We are not taking anything off the table.
We want to see action and we’ve seen some.”

“At the onset of the COVID-19 emergency, to help ensure that auto insurance rates are just and reasonable, FSRA strongly encouraged insurers to provide customer relief that reflected the change in driving patterns and reduced costs and which would help offset financial hardship their customers were facing due to the COVID-19 outbreak” Tim Bzowey, executive vice president, auto/insurance products, said in a statement. “FSRA also released guidance that is aimed at ensuring there are no regulatory barriers to consumers being treated fairly, and which outlined that insurers have a number of options for providing customers with financial relief during this temporary declared emergency period.”

In April, IBC announced insurer’s initial relief measures plan. “Insurers acted very early in the pandemic to provide relief to Ontarians, committing to $600 million in consumer relief measures across the country,” IBC told Canadian Underwriter. “As the situation evolves, insurers continue to support their customers. We look forward to continuing to work with Minister Phillips and FSRA to support Ontarians during this challenging time.”

Canadian Underwriter has kept a running list of the latest announcements made by a number of insurance companies for premium relief. Rebate measures include a percentage off monthly premium, a flat rate dollar amount rebate or options to change driver profiles to reduce premiums — and, in some cases, a combination of those options. 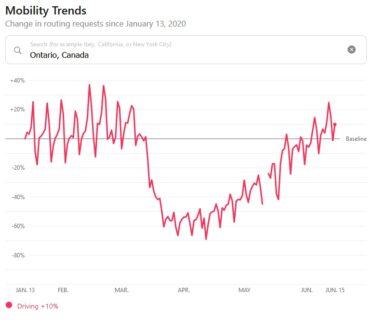 Screenshot of Apple’s Mobility Trends Report as of June 15. It compares driving habits to a baseline of Jan. 13.

Further, while driving had decreased at the height of the pandemic, it crept back up to near — and in some cases, above — normal levels a month ago. In Ontario, Apple’s Mobility Trends Report shows that driving as of June 15 is now 10% higher than its baseline of Jan. 13. Despite a quick drop at the beginning of the month, June driving in Ontario has been above pre-pandemic levels. It has been on a steady climb since late April.

Drivers, however, were taking advantage of open roads. Speeding and dangerous driving infractions were up, police told Canadian Underwriter in May. Still, collisions dropped, hence the call to reduce premiums.