What can be done just seconds before an earthquake hits?

Natural Resources Canada (NRC) is developing an earthquake early warning system that will provide valuable time before an earthquake strikes to allow protective measures to be put in place for people and critical infrastructure.

“It can provide anywhere between seconds and tens of seconds of warning before the strong shaking from an earthquake arrives, allowing the activation of protective measures both for population and infrastructure,” said Henry Seywerd, program manager for early earthquake warning with NRC. He was speaking during the panel discussion Fire, Flood, and Earthquake: Latest Developments at CatIQ Connect Dec. 2.

But can mitigation measures really be taken with just seconds of warning time? asked one conference attendee. “Absolutely, there are clearly mitigation measures to be taken in a few seconds,” Seywerd responded. The most obvious to protect people is the “drop, cover and hold” method – drop to the floor, cover yourself under a table, bed or another piece of furniture and grab hold of something.

There are a variety of other protective actions that can be taken, including: 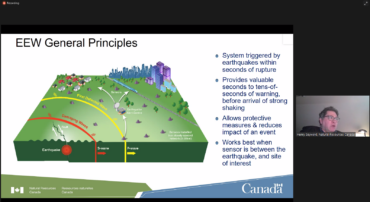 “So, there are clearly things that can be done in a very short period,” Seywerd said during his presentation. “The key here is fast distribution of the alerts and automated connection of the protective actions to the alerting system.”

Work on the earthquake early warning system began in 2019 with the development of specifications and procurement of equipment. The equipment was mostly delivered this fiscal year, Seywerd reported, and work is being done on network design (determining where stations should be located, doing performance simulations, looking for station hosts and where to install sensors).

Currently, sensors are being installed and “that will really roll out after Christmas,” Seywerd said. Public information will likely begin next year, and the plan is to implement the system by 2024.

NRC also plans to build a cross-border system with the U.S. Geological Survey. “It’s our intention to provide alerts to the public and to critical infrastructure operators,” Seywerd said. “We’ll be exchanging data with the equivalent American system, and the alerting systems will be designed to ensure that the alerts across the border are consistent.”

A test system is already running in Canada, and is fully integrated with the U.S. system. Seywerd said the plan is to use the national public alerting system already in place for things like strong weather and amber alerts.

“Damaging earthquakes are inevitable,” he said. “We know that this is going to happen; we don’t know when, and we don’t know how strong.”