What makes wildfire modelling so difficult

Predicting losses from wildfire is more difficult than for other natural hazards like wind and earthquake, a risk control expert for one insurer suggests.

The effect of wind and ground motion on buildings are better understood than wildfire, he said. 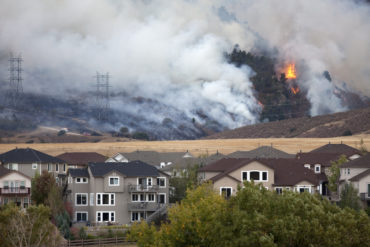 “It’s a difficult thing to anticipate is how the wind dynamics will affect the likelihood or the propensity for wind-borne embers to be driven in a certain direction,” said Steinmetz.

AGCS and Insurance Information Institute released last week several pieces of advice on how to mitigate commercial wildfire risk. For example, they advise clients to consider applying fire-fighting foam (both pre-treatment and suppression) around your property or on combustible building materials.

In an interview, Steinmetz was asked how the insurance industry has progressed in wildfire models over the past couple of years and where the modelling providers need to get to.

One critical piece of improving wildfire modelling is to learn about how foliage and moisture content affects the risk of a structure being damaged by fire, he suggested.

“It is a dynamic environment that is not as easily modelled,” said Steinmetz. “In a way it’s a bit like terrorism modelling. You can know how much damage can come from a two- or five-ton bomb but you aren’t really able to get to the mind of a terrorist to really understand what is the real likelihood – what is the calculus behind that.”

To predict wildfire damage, a catastrophe model needs to take into account several factors – including the weather and climate at the source of ignition, availability of fire suppression equipment, surface temperature, human interaction and snow cover in the winter season, Swiss Re said in a Wildfire in Canada: Fostering Resilience Through Advances in Modelling, a paper released earlier this year.

“Solution providers are aiming to understand region-specific and even location-specific wildfire risk,” Swiss Re said in the paper. “However, their models do not yet have a forward-looking view of physical conditions that show causal effects on igniting wildfires in the near future, such as surface temperature, human interactions or snow covers in the winter season.”

On Wednesday, more than 100 people were fighting a wildfire that broke out this past Sunday north of Oliver, British Columbia, the Canadian Press reported. An evacuation alert prompted by the fire was issued Monday by the Regional District of Okanagan-Similkameen which covers 206 properties north of Oliver.

In 2016, the Alberta wildfire that prompted the evacuation of Fort McMurray cost the property and casualty insurance industry about $4 billion, a record for a Canadian catastrophe.