What Sonnet hopes to gain from NHLPA partnership 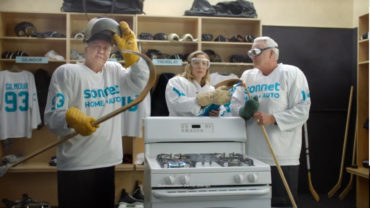 From left, Doug Gilmour, Jayna Hefford and Mario Tremblay from Sonnet’s ad campaign featuring current and retired NHLPA members. The trio are curving their hockey sticks the old fashioned way with a flame.

Technology is making more of an impact in professional sports, and the same can be said for insurance. That makes re-upping the relationship between Sonnet and the National Hockey League Players’ Association a natural decision, said the company’s marketing head.

The commercials feature thee young current NHLers and three retired pros. The spots start with the younger players prepping for a game in a way that differs from the retired group, who stick to their old ways on the other side of the locker room.

Sonnet, which launched in 2016, is still working to build its brand awareness and these ads have helped with doing so. “The main objective of these commercials is to drive brand awareness first and foremost,” explained Brian Long, vice president of marketing at Sonnet. Partnering with a credible brand like the NHLPA helps the company do that. “It’s also to help create more awareness around how insurance is changing.”

To that point, that’s the focus of these particular ads. Other Sonnet campaigns will show different value propositions the company offers, while this one with the NHLPA sticks to a simpler message. “It’s very much just a brand play and calling out the fact that you can buy insurance online,” Long said. 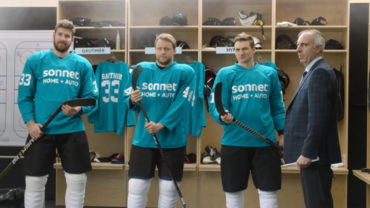 From left, Frédérik Gauthier, Morgan Rielly and Zach Hyman (along with their coach) from Sonnet’s ad campaign featuring current and retired NHLPA members. The three players disapprovingly look on at the retired players’ methods, as they hold their pre-ordered custom curved hockey sticks.

In one commercial, the current players – NHLPA members Morgan Rielly, Zach Hyman and Frédérik Gauthier, all of whom play for the Toronto Maple Leafs – admire their new shipment of carbon fibre hockey sticks with a custom curve of the blade. Meanwhile, the retired group – made up of ex-Leaf Doug Gilmour, ex-Montreal Canadien Mario Tremblay and multiple gold-winning Canadian women’s hockey player Jayna Hefford – crowd around a gas stove curving their sticks the old fashioned way of using heat. Smoke fills the room as Gilmour’s stick catches on fire, with Hefford wielding a blowtorch to Tremblay’s stick. The younger players look confused by the old school methods as Gilmour lifts his welder’s mask and asks, “What? You guys don’t curve your own sticks anymore?” The younger players shake their heads disapprovingly. A voiceover then says that hockey has changed and insurance has as well.

There are a few differences from last year’s campaign, such as a few new faces, but certain themes remain, such as exaggerations for humour (like the oversized curve of Gilmour’s stick) and driving home the voiceover’s message.

“You’ll notice in all our spots that everything … is based on reality,” Long said. “These are all things hockey players do or have done in the past. And we just have some fun with it.”

The spots are humorous, as are Sonnet’s other campaigns. “Insurance isn’t the most exciting category so I think it allows us to add a little fun,” Long said. “I think it does portray who we are as a brand.”

An ad campaign centred around hockey is a no-brainer for the Canada-based company, as was the importance of using Canadian-born hockey players. And even though Morgan Rielly was born in Vancouver and plays in Toronto, it’s a connection two cities can share with the ad. “That allows us to appeal to different markets as well,” Long said. “There’s a bit of hometown love for these players even if they aren’t actually playing for those hometown teams.”

The campaign rolled out mid-January and will continue until the end of the current hockey season and will be featured on television and social media.