What the Liberal minority government means for insurers 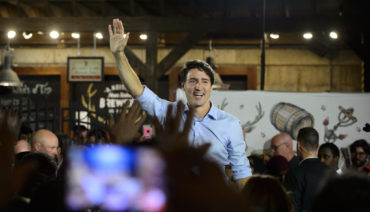 Something good may be in store for the property and casualty insurance industry as a result of the federal election Monday night. With the re-election of the federal Liberal party, albeit a minority, the stage is set for the speedy arrival of a flood risk mitigation plan.

The Liberals promised a number of items in their campaign platform that mirrored what the Insurance Bureau of Canada (IBC) said was necessary to reduce risk around flooding. Now that the Liberals hold the most seats in Ottawa, IBC’s vice president of government affairs Craig Stewart is looking forward to getting to work.

IBC will be working with officials from a number of federal departments, particularly Public Safety Canada, to support the Trudeau Liberals’ flood mitigation plan, Stewart told Canadian Underwriter Tuesday, the morning after the election. The Liberals won 157 seats, 13 short of the number required to form a majority government.

After the election, IBC told Canadian Underwriter that it is prepared to work with the minority government to get movement on flood mitigation. “The Liberals have committed to an action plan on flooding and we intend to support them in making that a reality,” Stewart said.

What kind of support would IBC offer? “We believe the best approach is to work constructively with the civil servants to support the administration and to make it as easy as possible for them to fulfill their election promises,” he said. “The flood file is complicated, is national in scope, and requires provincial cooperation. So we will continue to focus also on advocacy with provinces to implement those measures.”

The Liberal’s climate plan said the party would:

There’s no time to waste, Stewart noted. The feds will be laying “the groundwork for discussions with provincial and territorial counterparts and those discussions will get underway immediately,” he said.

Stewart pointed to the United Kingdom and the development of Flood Re, a joint project between insurers there and the government. It’s a reinsurance program that allows for widely available and affordable flood coverage to be part of home insurance. That took three years to put together.

“We believe the key decisions to establish a Canadian version of Flood Re will hopefully be taken in the near future and that a future government, should it change, would have no reason to roll that decision back,” Stewart said. “In a minority situation, we always have the opportunity to work with all parties to build non-partisan support and we intend to do that.”