Canadian property and casualty insurance professionals would like a more flexible, hybrid workplace, a recent survey shows, but the question for employers now is what such an arrangement might look like.

About 87% of the more than 1,150 P&C insurance professionals surveyed by Canadian Underwriter in mid-January reported that they were working from home to avoid the spread of COVID-19. The global pandemic has killed just under 23,000 Canadians over the past year.

Seventy-one percent in the Canadian Underwriter survey said they were either satisfied or very satisfied working from home. Eighty-one percent wanted their employers to offer more flex time to work from home after the pandemic is over.

The possibility of such hybrid work arrangements is now closer to becoming a reality, as Canadians start to book vaccinations for COVID-19. But now that the vaccines have arrived, water cooler discussions have started to turn towards what a post-COVID workplace will look like. In Canada, given the slow pace of the vaccine rollout, it may be too soon to tell.

Several industry executives have told Canadian Underwriter that they expect the five-day work week will go the way of the dodo bird. 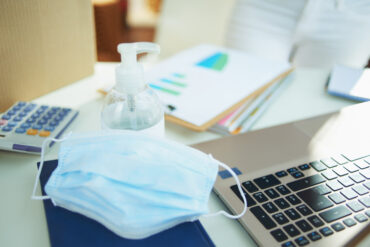 “The future of your daily work environment will probably look more like a hybrid model between two and four days in the office each week,” Paul Martin, president and chief operating officer of KRGInsure/RRJ Insurance Group Limited, commented to Canadian Underwriter in January. “Flexibility of the work environment will be one of the greatest selling points in attracting new talent to any organization.”

The slow vaccine rollout in Canada means safety remains a key priority for people contemplating a return to work. While the vaccines may prevent COVID from killing workers, not every employee will want to take a vaccine, nor will the vaccine stop people from spreading or becoming infected with the virus.

Fifty-three percent of Canadian P&C professionals in CU‘s survey said they would not feel comfortable working with people who have not been vaccinated, while 55% said vaccination should be a requirement before returning to office work.

In the United States, where the vaccine rollout is 10 times faster than in Canada, the logistics of pulling off flexible arrangements is now at the forefront of discussions. What sorts of things are U.S. employers trying to figure out regarding a return to the office, whenever that might be? (Many sources say this isn’t likely to happen until at least September at the earliest.)

In an article published Mar. 20, the Wall Street Journal recently canvassed the opinions of several CEOs of large, publicly-traded companies to see what they were doing about hybrid work arrangements. The executives appear to be turning their minds towards juggling flexible work schedules, team-building, and creating more open, conference-friendly workspaces.

Scheduling who would be working in the office, and when, was a central topic area for discussion. “[U.S.-based] insurer Prudential Financial Inc., which expects most of its roughly 42,000 employees to work in the office half the time starting after Labour Day, wants to make certain not all staffers choose to stay home Mondays and Fridays and then work in the office mid-week,” the Wall Street Journal reported.

As the WSJ article points out, hybrid models will likely vary by company.

Tech company Adobe Inc., for example, plans to allow employees to work from home up to two to three days a week, with employees booking reservation times for desks. Tech company Citrix Systems Inc. says it won’t put a set limit on how many days employees may work from home, saying the employee’s role at the company will likely dictate the hours they work from home.

Several sources say that polling employees about their preferences will be important, and then placing them in a balanced environment. “Consider letting employees choose their work scenarios,” the U.S.-based Sheet Metal & Air Conditioning Contractor’s National Association (SMACCNA) says on its website. “Some may opt for more time in office, while others will find one day a week, or every other week, is sufficient interaction time. The goal is to achieve organizational continuity.”

Some companies in the States are opening up their office spaces so that they are more conference-friendly. The theory being that when people come to the office, it will more likely be for meetings with co-workers or clients.

In a hybrid work world, offices should continue to employ the video technologies that got them through the pandemic in the first place, the SMACCNA recommends. “Continue to provide employees with collaborative tools such as Zoom and Teams. Communication is a key element of organizational effectiveness and worker engagement. Work to minimize gaps between remote and in-office team members.”

For managers, this may be easier said than done, with workers scattered across the four winds. Team-building will be a critical skill for managers, post-pandemic. Expedia, for example, told WSJ that they are concerned about workers in the office getting a better experience than those who work remotely, away from the rest of their team members.

In the WSJ article, software company Twilio Inc. suggested that a post-COVID workplace could see a re-balancing or re-shuffling of teams, “with staffers gravitating to bosses who embrace their preferred style of working.”

That seems likely to encourage insurers, already a competitive industry, to compete for talent on the basis of their hybrid workplace model.

More News
Related
Will the need for social interaction make the hybrid office a passing fad?
Contactless payment in a pandemic: There’s an app for that
CU Webinar: Industry execs to discuss impact of economic recession on Canada’s P&C industry
How COVID-19 has changed cyber underwriting