What’s coming to the forefront of commercial insurance

How do you insure intangible assets like intellectual property or data on the cloud?

If you are not thinking about this now, you could be in a few years, insurance company executives told brokers attending Canadian Underwriter‘s Top Broker Summit meeting in Toronto Monday.

For many of the world’s largest companies, most of their assets are actually intellectual property rather than physical assets, Economical Insurance CEO Rowan Saunders observed during the summit’s CEO panel. 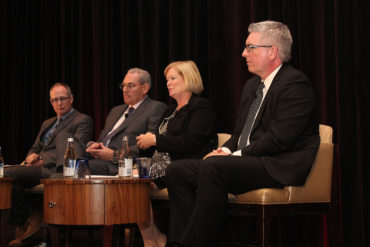 “I worry about all those intangible assets that are being created with technology,” added Carol Jardine, president of Canadian property and casualty operations for Wawanesa Mutual Insurance Company. “Where are the insurance products for all of those?”

They were answering a question from the audience as to whether there is anything on the industry’s “back burner” now that could become a “forefront issue” five to 10 years from now.

“Physical assets are what we are used to insuring,” replied Jardine. “If you look 10 to 15 years down the road, what percentage of what we own will actually be a physical asset that we own? How much will it be shared? How much of it will be something that we are involved in, perhaps, but can’t touch or feel? That’s what I worry about.”

She pointed to cloud computing as an example. Your client can get property insurance for the servers in the building, but what happens if they use the cloud computing model, meaning they store their data and applications on someone else’s computers for a fee?

“There will be fleets running without a driver,” added panelist Steve Phillips, chief operating officer of Sovereign Insurance, a complex commercial and specialty carrier owned by The Co-operators Group Ltd. “How do you underwrite that?”

“It’s a rolling computer,” as Phillips observed of driverless fleets. “We have to get our heads around how we are going to deal with that?”

The discussion about tangible assets arose following the executive panel, in which speakers were asked about the future of the broker channel.

“Brokers are the ultimate sales machine, and have to have that sales culture,” said Saunders. “But what I see brokers evolving into is more real risk management – understanding and advising on risk, potentially expanding more broadly into claims management.”

Brokers will have to provide a “total risk management” solution in the future, Phillips agreed.

“Commercial continues to require a trusted advisor  – someone who can look after those risk management and loss prevention needs of those commercial entrepreneurs,” Jardine told the broker audience. “[The entrepreneurs] really don’t have the time or the energy to do that work. They really want you to do it.”