What’s the likelihood of an EF5 tornado in Canada?

Following the EF3 tornado that struck Dunrobin, Ont. on Sept. 21, should insurers worry about the potential for a powerful EF5 strike on a major population centre in Canada?

Probably not. But they should be concerned about tornadic storms in major centres, although not necessarily EF4s or EF5s, said Glenn McGillivray, managing director of the Institute for Catastrophic Loss Reduction (ICLR). 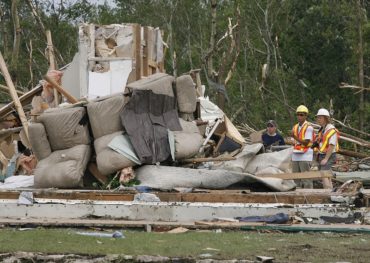 Environment Canada officials inspect the damage in Elie, Manitoba, on Saturday, June 23, 2007 following Friday’s tornado. The tornado destroyed at least four homes and damaged several others, but there were no reports of injuries. (CP PHOTO/John Woods) CANADA

The only F5 ever recorded in Canada occurred in Elie, Man. on June 22, 2007. The twister destroyed or damaged several homes, totaled several vehicles, but took no lives. Insured damage came in at about $20.5 million.

“In my view, insurers should be more concerned about a strike from a well-placed lesser tornado which, statistically, is more likely and which could have fairly serious consequences,” McGillivray wrote in a blog published Oct. 2. “Such an event could be of particular concern to a small local/regional writer that may have concentration issues in a given area and a cat reinsurance program that may not be up to the job.”

So, while insurers must always be cognizant of the potential for extremely low probability/high impact events (an EF5 tornado), “they cannot and should not lose site of the fact that a lesser event with a higher probability of occurrence but lower impact could, in some circumstances, be almost as painful.”

What needs to be reinforced, McGillivray said, is that you don’t need an EF4 or EF5 to incur total losses of homes and other structures. As was illustrated in Vaughan, Ont. in Aug. 2009 (where two F2s struck, one in Woodbridge and one in Maple) and Angus, Ont. in June 2014 (also an F2), all you require for a total loss is to lose the roof. “When this happens, the home loses its structural integrity and must be razed and rebuilt.”

(Up until the 2012 tornado season, Environment Canada used the Fujita Scale to measure tornadoes. It switched to the Enhanced Fujita Scale – considered to be a more modern and improved version of the original scale – on April 1, 2013.)

Of the roughly 500 homes damaged in the pair of Vaughan tornadoes, about 25 had to be bulldozed. In Angus, ten of 100 homes had to be razed due to roof loss. “A roof torn from a house is as good as the entire home being wiped from its foundation,” McGillivray said. “There are no degrees of death.”

“Canada gets about 62 tornadoes a year, the second highest occurrence of tornadoes in the world after the U.S.,” McGillivray told Canadian Underwriter Tuesday.

Most tornadoes occur in central/south central Alberta and Saskatchewan, southern Manitoba, southern Ontario and down through the St. Lawrence Valley.

More News
Related
Tornado damage: View from the ground
Claims whack-a-mole: what’s going on in property lines?
Were the Ottawa-Gatineau tornadoes the costliest in Canadian history?
What made the Dunrobin tornado so unique

1 Comment » for What’s the likelihood of an EF5 tornado in Canada?