Where 2022 tallies for insured damages in Canada

Insured damage for severe weather events across Canada hit $3.1 billion last year, the third-highest total of NatCat losses in the nation’s history, according to Insurance Bureau of Canada (IBC) and numbers supplied by Catastrophe Indices and Quantification Inc. (CatIQ).

“While the $3.1 billion figure is alarming, no single catastrophic event nor any particular region accounted for the majority of losses,” IBC said in a press release.

“Last year ended with a bang, with the east and west each recording their own catastrophe in the final week,” CatIQ added in a public statement. “The pair of events pushed the Canadian insured catastrophic losses over $3 billion, a mark that hasn’t been reached since 2016 when a wildfire devastated Fort McMurray, Alta.”

Winter storms in B.C. and Ontario over the holidays in December accounted for about $260 million of the total damage.

Fifteen events last year incurred at least $30 million in insured losses, CatIQ reports. Two events made up a substantial portion of the overall industry total – the May 21 derecho in Ontario and Quebec ($1 billion) and Hurricane Fiona in Atlantic Canada in September ($800 million).

“There was an unprecedented number of catastrophes in 2022, including now two of the top ten events in Canadian history,” said Laura Twidle, president and CEO of CatIQ. “As our exposure and severe weather frequency increase, we all must come together to find unique solutions to mitigate the impacts to extreme events.”

Unlike 2016, the highest loss year on record, where the Fort McMurray wildfire accounted for about 75% of national losses, 2022 saw disasters from nearly every part of the country, CatIQ observed.

A cost tally for 2022 lists eight separate events accounting for the bulk of the insured losses: 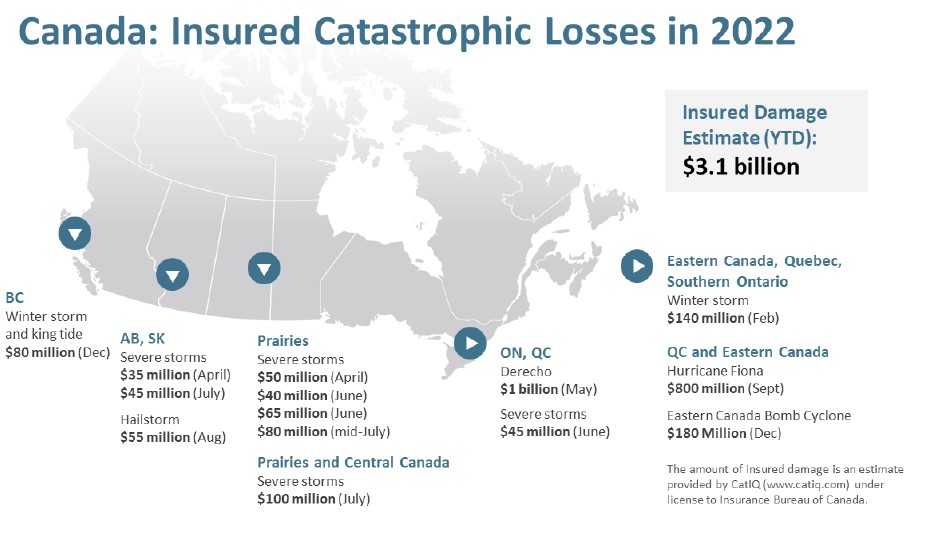 The volume of storms highlights the high costs of climate change.

“Governments have spent far too little attention to adaptation in the discourse over climate policy,” Craig Stewart, IBC vice president for climate change and federal issues, commented. “This spring, the federal government needs to lead the way in finalizing a National Adaptation Strategy and boldly funding both community-level infrastructure and property-level retrofits that increase resilience to floods, windstorms, heat events and wildfires.

“In particular, we’re seeing early signs that property insurance may become less affordable, or even unavailable, as global reinsurers shift capacity away from riskier countries. Now is the time for Canadian insurers and governments to partner on a National Flood Insurance Program to ensure Canadian homeowners remain financially resilient in the face of these growing number and severity of events.”

Year 2016 remains the most expensive year for Canadian P&C insurers in Canadian history, including $5.96 billion in insured damaged due largely to the Ft. McMurry wildfire. Year 2013 ranks second, largely based on flooding in Alberta and greater Toronto – including a December Greater Toronto Area ice storm – costing $3.87 billion in insured losses.

More News
Related
How to speed up claims response for NatCats
Flood policy education: What brokers are up against
Which risks will trouble the globe in 2023?
What are Canada’s major business risks for 2023?