CU Total Loss Series: Where are the bottlenecks?

Last month, we reported the industry was taking an average of between 19 and 25 days to get a cheque into the hands of consumers who had totaled their vehicles. How can we cut those times down to 10-15 days?

Having identified key bottlenecks, we will suggest practical solutions next month in the final instalment (Part 3) of our total loss series.

Smashing a car is a disorienting experience for most consumers.

Once your car is totaled, it’s hard to know what to do next. The process seems to vary across insurers, tow truck companies, and municipalities. It can take time to figure everything out, whether you are a consumer or an insurer.

But time is money. Each day it takes to figure out what to do with a totalled car costs certain insurers up to $900,000 in car rental and storage yard fees. The current process is too long, P&C industry professionals acknowledge. It drives up claims costs and hence drivers’ premiums. Insurers want to reduce cycle times and pass the associated savings along to consumers.

So where is the “fat” in the system?

In provinces where private insurers cover auto losses, particularly in Ontario, a major challenge for insurers is to gain control over where a vehicle gets towed after a total loss.

“Securing the vehicle is first and foremost,” says Ewen Cameron, senior vice president of claims at RSA Canada. “As an industry, if you have designated certain drop points in the Greater Toronto Area and said every tow truck had to drop off that vehicle here, then you eliminate any contention around storage fees. You eliminate any contention around access to the vehicle. So you know where your vehicle is, and you can go there that day.”

Aviva Canada wants the province to allow auto insurance discounts for consumers who agree to send their wrecks to the auto insurers’ preferred collision centres. This is not permitted under current legislation. Such a solution would allow the industry to better manage the time it takes to process the auto wrecks, Aviva says, and it would also eliminate costly instances of fraud at unscrupulous body shops.

It may seem strange to talk about how long it takes to find a towed car. But the fact is, the tow truck industry in Ontario is not tightly regulated. In fact, up until 2017, the province’s Repairs Storage and Liens Act allowed tow truck storage yards up to 60 days to report a vehicle on its property. That time has since been sliced down to 15 days.

Before then, Ontario auto insurers cited numerous incidents in which “Good Samaritan” tow truck drivers magically arrived at the scene of an accident; they would hook up the vehicle and take it to a storage yard of their choosing. Some of those yards had restricted business hours, or made it difficult for vehicle owners to arrange to pick up their belongings. Meanwhile, the meter was running: insurers were watching their vehicle storage fees and car rental costs increase daily. 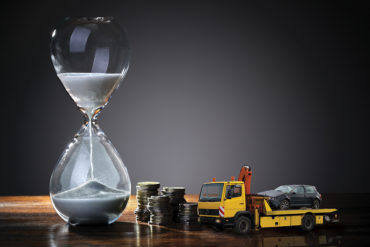 Another recent change to the Repairs Storage and Liens Act attempted to close yet another loophole that storage yards could exploit — producing an invoice to the insurer for services rendered.

Lorna Richards, program manager of auto physical damage at Gore Mutual Insurance Company, explains the significance of this change: “We as insurers would say, ‘Okay, we want to pick up this vehicle. How much are the charges owing, so we can send out a cheque with this person to come pick it up?’ And they would say, ‘Well, I don’t know that information right now. You’d have to talk to Bob, and Bob’s not here.’ And that was a game that w was being played. So, it would be like, ‘Okay, when will Bob be in?’ And then callbacks.” Such runarounds add days onto the process.

As noted, the Repairs Storage and Liens Act has since been changed. Now, storage yards have to produce an invoice outlining their charges. But “we’re still finding that difficulty [around negotiating],” Richards says. “We need to get that letter of proof saying we told them [to submit] an invoice. But they don’t have faxes, or they are not disclosing so we can get that information to them in a timely manner.”

In Ontario, the precise location of the storage yard has cost implications for insurers.

“Right now, municipalities have varying regulations and bylaws around how much a tow can cost, how the process works in terms of hooking the vehicle up, and where the vehicle goes,” says Elliott Silverstein, manager of government relations at CAA South Central Ontario. “Because there is no specific set of provincial regulations, the consumer really is at the mercy of what the municipalities have set out in their regulations. For municipalities that don’t have regulations, it is effectively the Wild West, where no rules apply, because there is no provincial model or minimum standard to work from.”

Just like a driver’s licence, towing fees and operations should be regulated at a provincial level, the province’s insurers say.

For public insurers outside of Ontario, the whole idea of an insurer not being able to access the vehicle immediately for appraisal is an odd concept. “The towing situation [in Ontario] is just foreign to us,” said Kelly Merchant, senior regional service manager in the field at Audatex, a Solera company.

“Crown insurers for the most part tow the vehicle to one of their big claims centres. Using Saskatchewan as an example, essentially, if a car is damaged, the tow truck picks it up from the accident site and takes it directly to the [public insurer’s] claims centre, one of their big estimating facilities. And at that point, staff appraisers will [make] the estimate and determine if in fact the vehicle is a total loss or not.”

The estimation process, which generally takes between two and three days, raises another bottleneck issue for insurers. Quite simply, there are not enough appraisers or claims adjusters to go around.

“One big bottleneck is due to high-volume weather [catastrophe] events,” says Richards. “There are not enough resources to get out there to inspect the vehicles.”

An aging industry demographic doesn’t help. In its 2018 study, Demographics of the P&C Insurance Industry in Canada, the Insurance Institute of Canada reported that more than one in four P&C industry workers will retire by 2027. When asked to identify the Top 3 industry occupations requiring “urgent” attention, survey respondents overwhelmingly chose the titles of Claims Adjuster/Examiner, Casualty Adjuster, and Accident Benefits Adjuster.

Negotiating a price for the depreciated value of the vehicle can also add time to the process. “You can sometimes run into delays when you have done an evaluation on the vehicle and customers don’t agree with the value,” Richards observes. “There can be lots of different reasons, including personal attachment. Cars are personal items. They will always have more value to the owner than to anyone else.”

In one famous example, a Ferrari owner in B.C. sued the Insurance Corporation of B.C. for bad faith after the public insurer paid almost $800,000 to repair the vehicle – about $100K more than the appraised value of the car. In that case, still before the courts, the car owner alleges that delays in the appraisal process, including an arbitration proceeding, reduced the auction value of his vehicle. The public insurer denies this.

Even when the insurer puts a cheque in the hands of the insured and takes ownership of the vehicle, the total loss process does not end there. For an insurer, which now owns a hunk of junk, auctioning off the car for spare parts can take another two to three weeks.

A lot of paperwork is required for the auctioning process. The Government of Ontario, for example, requires a “branding” form that asks the insurer to spell out whether the damage is totally irreparable, partly repairable or repairable. In Quebec, Cameron reports an extreme case in which he is still waiting for a proof of ownership for a recovered stolen vehicle that has been sitting for 500 days.

For an insurer, getting a totalled vehicle to auction quickly is important: recovery can be up to 30% of the value for the car – or an average of $2,000 recovered for the insurer. “There is a significant amount of money in that, to be honest,” says Cameron. “In our salvage, there is probably $30 million per year in recoveries. Think about how much premium you have to write to make $30 million.”

All told, when you include the auction process in the mix, the entire process for processing a total loss can take up to 115 days, observes Cameron.

How long should the whole process take? Richards said the average time to get a cheque in the hands of a consumer was 19 days in 2018, up from 17 the year before. Cameron says RSA is aiming at a “best in class” timeline of 10 days.

How to shave seven to 10 days off the process?

Canadian Underwriter will probe some solutions coming up in the June issue.