Who’s at fault in this duel for street parking?

In a territorial battle for street parking involving sneakiness and deception, a B.C. driver lost his bid to recover his increased auto insurance premium following a minor collision — even though he managed to shift half of the fault over to the other driver.

Originally, Wally Henkel, owner of Henkel Construction Ltd., was found 100% at fault for not backing safely into a spot that was partially occupied by another vehicle. But Henkel was able to convince a B.C. small claims court that the motive of the driver half-filling the parking space behind him wasn’t what it seemed.

B.C. Civil Resolution Tribunal agreed with Henkel that the other driver, Sina Lankarani, was 50% responsible for the fender bender in a duel for an empty parking spot. The tribunal nevertheless found that Henkell was not entitled to recover his $708 auto insurance premium increase, for reasons explained below.

Ultimately, the fault for the collision came down to the credibility of the drivers involved.

Henkel was driving along Graveley Street near Commercial Drive in the east end of Vancouver. Graveley Street is a two-way residential road, but it is too narrow for vehicles going opposite directions to easily pass each other. There is parallel street parking on either side of the road.

A protest march on Commercial Drive backed up traffic on Gravely Street for about 10 to 15 minutes. Henkell said he was stopped behind a parking spot that had opened up, and so he decided to take it. At this point, Lankarani was stopped in his vehicle behind Henkell.

Since the parking spot ahead of the place where Henkell wanted to park was open, Henkell signaled, pulled over to the curb, and straightened his van. He said he did this to reverse into the spot without getting in the way of traffic. 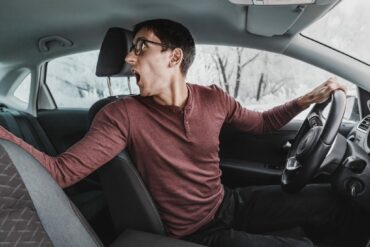 But after backing up five feet, Henkell said he heard a honk and stopped — too late. He did not feel any impact, but Henkell did not dispute that he had struck Lankarani’s car, which was nosed front-first into the parking space.

Lankarani denied that he was trying to claim the parking space for himself. Instead, he said a “traffic authority,” which the CRT interpreted to mean a police officer, had told him to pull over for an emergency vehicle. He claimed Henkell was entirely at fault for not backing up safely.

The CRT didn’t believe Lankarani’s explanation for nosing his way into the space.

“I find aspects of Mr. Lankarani’s account of what happened inherently improbable,” CRT Member Eric Regehr wrote in a decision released Thursday. “I find it unlikely that a police officer directed him to pull over as he alleges. This is because traffic was backed up behind Mr. Lankarani and, given how narrow Graveley Street is, these cars would have had nowhere to move out of the way. With that, making Mr. Lankarani pull over would have served no purpose.

“More importantly, there is no evidence that an emergency vehicle did, in fact, pass the parties, even though Mr. Lankarani says that he was stopped for a full minute after being told to pull over.

“I…find it more likely than not that Mr. Lankarani wanted to take the parking spot on Graveley Street, which was very close to his destination.”

Although he found Lankarani 50% at fault for the collision by nosing his car into the space, Regehr also found that Henkell was 50% responsible for not backing up safely.

Although the small claims court reduced Henkell’s share of the blame, it ruled that Henkell was not entitled to recover his $708 auto insurance premium increase, which was assessed after Henkell was found 100% at fault for the crash. That’s because, under the public insurer’s basic auto insurance tariff, any claim for which a driver is found to be more than 25% at fault is a “chargeable claim.”

That means an increase in premium following a collision for which a driver is 50% responsible is the same as the premium increase for a driver found to be 100% at fault. In other words, Henkel didn’t suffer a “loss:” His auto insurance premium went up the same amount, regardless of whether he was 50% or 100% at fault.

More News
Related
Recurring back pain and auto liability: how this court applied the two-year limit
No, you can’t ram a car in a fit of road rage and collect insurance for the damage
Estimator’s COVID dilemma: Photos of auto damage not enough, in-person visit not allowed
Aviva’s sting operation lawsuit against collision repairer clears first hurdle in court