Why brokers should check their older non-compete agreements

Ontario courts will declare older non-competition clauses unenforceable if they are unreasonable between the parties due to ambiguity or because the scope of prohibited activities is overly broad, two lawyers write in an analysis of Court of Appeal for Ontario decision.

In December 2021, the province’s Working for Workers Act came into force, prohibiting employers from obtaining a non-competition agreement from an employee subject to certain narrow exceptions. But in older cases, even when the agreement is entered into freely, Ontario courts will determine the clause is unenforceable if it is ambiguous or overly broad in restricting prohibited activities.

Brokerages operating in Ontario with older employment clauses in place will want to pay attention to the May 17 decision M & P Drug Mart Inc. v. Norton, which provides insight into how a provincial court will undertake to determine whether a non-compete clause is enforceable in circumstances where common law principles apply.

“Such a clause will be more likely to be considered reasonable and enforceable if it clearly and only restricts the employee from engaging in a particular type of work at a specific type of location; however, the clause’s enforceability will be in jeopardy if it goes further, as a court will likely view the prohibited activities as overboard,” write Toronto-based Rhonda B. Levy and Barry Kuretzky, knowledge management counsel and partner, respectively, with employment law firm Littler Mendelson P.C.

“In deciding whether a non-competition clause is enforceable, courts will focus exclusively on the clause’s wording and reject an employer’s efforts to persuade it that certain facts prove the parties’ intention was different from what the contract reveals.”

The appeal decision revolves around a pharmacist who resigned from his employment at M& P Drug Mart Inc. to work at another pharmacy less than three kilometres away. Pharmacy manager Sydney (Alan) Norton had entered into an employment agreement in 2014 that contained the following non-competition clause: 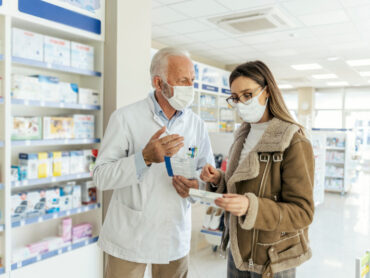 “The Employee agrees that during the Employee’s employment with the Company and during the one year period following the termination of the Employee’s employment with the Company, for any reason whatsoever, the Employee shall not carry on, or be engaged in, concerned with, or interested in, directly or indirectly, any undertaking involving any business the same as, similar to or competitive with the business within a fifteen (15) kilometre radius of the business located at 10 Main Street East, Huntsville, Ontario P1H 2C9.”

After Norton left in September 2020, his former employer reminded him of the non-compete clause through its counsel. Norton’s counsel said the clause was unenforceable, but M & P brought an action alleging his new employment constituted a breach of the clause.

The application judge found the clause was “ambiguous because it extended to prohibit Mr. Norton from being ‘concerned,’ even ‘indirectly,’ with an ‘undertaking involving a business’ that was ‘similar’ to Hometown IDA,” which was acquired by M&P in 2014.

“It might, for example, preclude him from working in a non-pharmacist role in a non-pharmacy department of a supermarket if the supermarket also included a pharmacy,” the appeal court said, referencing the Ontario Superior Court of Justice decision. “It was also unclear whether prohibited competition only included businesses that dispensed prescriptions, or whether it extended to any business that sold over-the-counter drugs, cosmetics, greeting cards, food, shaving items, or other products that are sold by Hometown IDA but also by convenience, grocery, and big box stores.”

A clause prohibiting “working as a pharmacist at a pharmacy” would have been reasonable, Levy and Kuretzky note in their analysis of the application decision. The clause was also overly broad because it prevented the employee from having an interest in such businesses and from doing work unrelated to the practice of pharmacy; these restrictions were wider than reasonably required to provide adequate protection to the employer’s legitimate proprietary interests.

M & P appealed the Superior Court ruling, arguing the judge erred in finding the covenant unreasonable between the parties. The employer argued the covenant was “unambiguous and not overly broad since when read in light of the surrounding circumstances – Mr. Norton’s occupation as a pharmacist, Hometown IDA’s pharmacy business, and certain per-contract communications – it clearly only addresses Mr. Norton working as a pharmacist in or for a pharmacy or a store that houses a pharmacy within the geographical limits of the covenant,” the Appeal Court decision says.

But the Appeal Court dismissed the appeal, saying the clause was not reasonable.

“M & P essentially asks the court to read the covenant as applying only to Mr. Norton acting as a pharmacist for a pharmacy or a store that includes a pharmacy in the year following the termination of his employment,” says the Appeal Court. “It argues that this was the protection the parties were aiming at in their pre-contractual dealings, that this extent of protection would be reasonable, and that this is the very conduct in which Mr. Norton engaged.

“But the covenant was not worded in such a restricted manner, the factual matrix cannot change the words used and [case law] prevents the court from rewriting the covenant. The result is that the covenant cannot be demonstrated to be reasonable.”