Why change in P&C is a difficult proposition: The innovator’s dilemma

Insurers are between a rock and a hard place when it comes to changing the way they do business, because of the risk of harming broker relationships, investment costs, and, at the end of the day, the current system works, observed a brokerage leader in a recent webinar.

Danish Yusuf, CEO and founder of Zensurance, acknowledged there are plenty of reasons for insurers to change the way they do business. These include offering better better products to customers, and making it easier for consumers to buy the products.

But there are just as many reasons why it’s difficult for insurers to move beyond the status quo, said Yusuf, who spoke at the Insurance Institute of Ontario’s latest At the Forefront series webinar, entitled The Insurance Industry Innovator’s Dilemma.

“I don’t want to discount how hard it is to make such a shift,” Yusuf observed. “I start with saying that, fundamentally, the industry is doing its job. Policies are being issued and renewed and endorsed. Claims are being paid. Hundreds of thousands of people [are] being directly employed in Canada, probably millions indirectly. It’s fundamentally working.”

But certain aspects of the business are becoming commoditized and more transactional in nature. Insurers really should move to transact those deals differently, he said, specifically within an online platform.

But insurers are in a difficult spot for three reasons, Yusuf said. 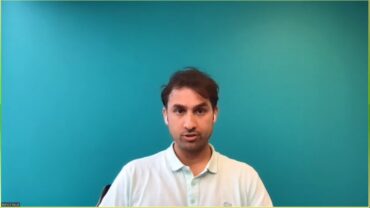 Danish Yusuf of Zensurance speaks during the Insurance Institute of Ontario’s At the Forefront series, ‘The Insurance Industry Innovator’s Dilemma.’

“What happens to the [broker channel] if you have 100% of your business going through brokers, and you now set up a parallel channel and you want to disintermediate the brokers?” Yusuf asked.

Granted, this has been done by Economical with its Sonnet brand and Intact with belairdirect, he pointed out.

“So, it’s happened,” Yusuf said. “But it’s a really, really tough decision, not only because of what the brokers may feel, but also your executives are compensated based on a certain model of business and they have relationships and people they’ve been working with for many, many years. So if you have a machine going at full speed, it’s very hard to shift the direction.”

Second, it’s a costly investment to build the technology to transact online — hundreds of millions of dollars, Yusuf said.

“Now, imagine you’re the executive that has to make the following case,” Yusuf said. “I want $400 million. I want to go after a low-margin business. I want to further commoditize it. And I want to alienate my brokers. Very, very tough case to make. Not all of those have to happen, but taking an extreme example, it is really hard to make that case.”

Third, the current system works. “So why rock the boat?” as Yusuf described the rationale. “It’s working. Let’s keep going.”

It’s difficult to be the first company to act on a drastic change, Yusuf observed. “It’s easier when a few have already done it first.”

In response to these three cases in support of the status quo, Yusuf brought up an old saying: There are two ways to go bankrupt — gradually and suddenly. He cited the example of the steel industry, in which large companies gave away low-margin business to small steel mills. Those mini-mills kept taking a little more each time until the big guys went out of business: the larger companies didn’t change to stop the new players from taking more of their business.

Yusuf sees what happened in the steel industry as a wake-up call to the P&C insurance industry. If large, established insurance providers continue to let new players take the low-margin, transactional business away from them, those new players will suddenly build up the resources to start taking away the high-margin business, too, unless the established players decide to change.

“It’s a stark way of putting it,” Yusuf admitted. “We’re not necessarily there yet. But the point here is to take a longer-term view and say, ‘Changes are happening. How do we start reacting today so that we are ready for things when we start getting to that ‘suddenly’ portion?’”