Riding the wave of high interest rates years ago, some P&C insurers and reinsurers overlooked their escalating combined ratios, an industry exec recently observed during a webinar. And that’s coming back to bite the industry now that the global COVID-19 pandemic has plunged interest rates to near-zero levels.

The decline in interest rates as been especially painful for the property and casualty industry, Matt Wolfe, president of Aon Reinsurance Solutions Canada, observed. Since governments around the world have essentially printed money to keep their economies from sinking to depths from which it can’t recover, rates have neared zero per cent, he explained.

“Well, that’s a huge impact on insurers and reinsurers,” Wolfe said during a recent Insurance Institute of Ontario webinar, At the Forefront: From the Great Fire to COVID-19: What’s next for the Global Reinsurance Market. “Reinsurance in particular; they write a long-tail liability portfolio. The difference in interest rates being six, seven, eight, or nine per cent, you could run 115% combined [ratio] and you’re fine. You’d still be making money.”

Companies used to be able to carry through just on investment income alone, but not anymore. “That’s a huge impact and it’s going to continue having an impact in the next few years,” Wolfe warned. “Interest rates and investment income hid a lot of sins. Now that there’s no more hiding behind the investment income, that’s another material impact of COVID.” 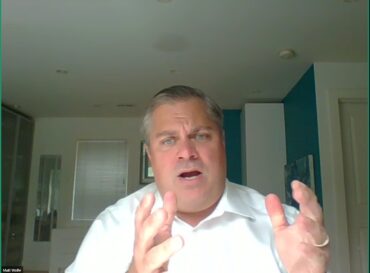 Matt Wolfe, president of Aon Reinsurance Solutions Canada, speaks at an Insurance Institute of Ontario webinar, “At the Forefront: From the Great Fire to COVID-19: What’s next for the Global Reinsurance Market”

Any relief on interest rates doesn’t appear to be coming any time soon. On Wednesday, the U.S. Federal Reserve announced it was leaving interest rates near-zero and will likely leave them there until at least 2023 to help economic recovery.

Wolfe put the costs of COVID, both real and potential, into perspective. He noted the industry is paying out about $10 billion (all figures in U.S. dollars) as a result of the novel coronavirus.

Claims have been paid out by reinsurers for things like trip and event cancellation, noted Dave Partington, CEO of Gallaher in Canada, during the Gallagher Talks virtual event on Sept. 15.

As for future payouts related to the pandemic (litigation over business interruption claims, for example), estimates go up to about $100 million, Wolfe reported.

“The biggest number came out of Lloyd’s, about $108 or $110 billion was what they believed the insured cost of COVID would ultimately be worldwide,” he said. “The midpoint, the $50 billion number seems to be a reasonable number.”

Let’s say numbers reach the higher end of the scale. That’s still below losses from the 2017 hurricanes that hit the United States. “If you look at [hurricanes] Harvey, Irma and Maria, you put those three together, it’s $120-$130 billion, well in excess of even the high rage of the COVID loss,” Wolfe said.

COVID-19 isn’t going to be something that is going to materially stress the insurance or reinsurance industry, Wolfe said, but “it’ll be a significant earnings event.” That said, it has an additional, potential impact on the asset side of the ledger. “If you had investments that were marked down, [it’s] a bit of a double whammy — the fact that your asset base is shrinking and your losses are coming in higher,” Wolfe said.

By paying out COVID-related claims, the market hardening will accelerate. Wolfe expects the impact will be much worse for insurers than reinsurers.

There are a number of factors for that, Wolfe said. “For the insurers, it’s been multiple years of under-pricing. There’s a lot of discipline going around; on the larger property side, we’re seeing significant pullback on limits. Insurers historically have put up $250-million, $500-million lines [and these] are massively being pulled back to $30-$50 million lines. That’s impacting the insurance market,” he said.

“The reinsurance market, globally, certainly they’re going to use COVID as an argument as to why prices need to go up, why they need more rate, that they have had a number of years of relatively underpricing, relatively soft conditions, [and] then you have the COVID.”