An Ontario claimant who suffered a severely disabling injury after falling off his dirt bike during a competition is entitled to accident benefits under his auto policy.

This is the result of Beaudin v. Travelers Insurance Company of Canada, released Feb. 26 by a three-judge panel of the Ontario Divisional Court.

Travelers had argued that the dirt bike Michael Beaudin was riding was not an “automobile” for the purpose of determining AB coverage at the time Beaudin was catastrophically injured in July 2017.

Licence Appeal Tribunal adjudicators disagreed on whether a motorcycle association has to sponsor a closed-course competition in order to disentitle the dirt bike rider to auto accident benefits coverage if they are injured.

On the day that Beaudin was injured, he was competing in the Rockstar Energy Motocross Nationals, a closed-course competition at Gopher Dunes in Courtland. The competition, organized by Stallybrass Promotions Inc., was sanctioned or sponsored by the Canadian Motorsport Racing Competition.

Ontario’s Off-Road Vehicles Act says “no person shall drive an off-road vehicle unless it is insured under a motor vehicle liability policy in accordance with the Insurance Act.” 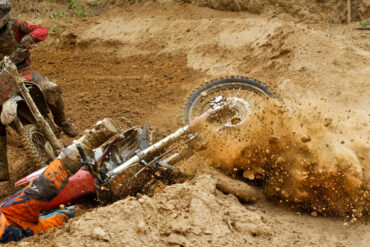 Travelers denied Beaudin’s claim, and he took the insurer to the LAT, which determined that it needed to decide whether the dirt bike was considered an “automobile” under the Off-Road Vehicles Act. If the dirt bike is an automobile, then the claimant is entitled to accident benefits.

The OVRA has four exemptions, one of which is “off-road vehicles driven or exhibited at a closed course competition or rally sponsored by a motorcycle association.”

[The other four exemptions are wheelchairs, road-building machines, golf carts, and self-propelled implements of husbandry.]

Initially in 2018, LAT member Karina Kowal ruled in favour of Travelers on the grounds that the dirt bike was not required to be insured at the time of the accident.

Kowal’s ruling was overturned in 2019 by Jonathan Batty, then the LAT vice-chair. Travelers appealed to Divisional Court, which upheld vice-chair Batty’s decision. So as it stands, the dirt bike does in fact require insurance because it was a vehicle on the day of the competition that injured the claimant.

Kowal’s initial 2018 decision in favour of Travelers was based on part on the “last antecedent” rule in statutory interpretation.

In 2019, LAT vice chair Batty found that Kowal erred in applying the last antecedent rule in the circumstances of Beaudin’s dirt bike accident case. So according to Batty, the description “sponsored by a motorcycle association”  modifies both the word “rally,” and “closed course competition.” As a result, a dirt bike driven in a closed course competition is not exempt from Ontario’s Off Road Vehicles Act unless the competition is sponsored by a motorcycle association.

It was not appropriate to apply the last antecedent rule to the exemption in the ORVA that is short and has no comma, Batty found. Instead, the clause should be interpreted according to the legislative intent of the Insurance Act and Off-Road Vehicles Act.

“It must always be remembered that the ‘rules’ of statutory interpretation are not rules in the ordinary sense of having some binding force. They are aids to construction, presumptions or pointers. Not infrequently, one ‘rule’ points in one direction, while another in a different direction,” the Divisional Court wrote in upholding Batty’s decision.

Kowal had initially concluded that the legislative intent of the ORVA is to protect the public when off-road vehicles are driven on land that the owner does not occupy. Allowing the vehicles to remain uninsured if they are driven on the owner’s land which would not pose any risk to the public, she reasoned, citing Matheson v. Lewis, released by the Court of Appeal for Ontario in 2014.

But Batty countered that the intent of the ORVA is to protect motor vehicle accident victims.

More News
Related
The ‘interpretative stumbling block’ in figuring out whether off-road vehicle accidents are insured
How Travelers won appeal over Ontario accident benefits dispute
Three ways of reducing your client’s risk of false slip-and-fall claims
Impeding, hindering or preventing: Do these mean the same thing in business interruption insurance?