Why e-sports could be insurance’s next big opportunity

Opportunities for insurance in the e-sports space has grown to a point where it can’t be ignored, says an industry observer.

But the growth of e-sports has been on an upward trajectory for years — it is now a billion-dollar industry. It’s too big for insurers to overlook, and yet it’s not that unfamiliar once you start exploring it, explained Jade Giltrap, media team leader at CFC Underwriting.

“There are so many similarities to lots of industries and lots of businesses we already insure,” she told Canadian Underwriter. “It actually aligns really well with the sports industry in general. So, when looking at things that are new and emerging, [e-sports] is for sure growing. When you pull it back into tangible areas people already understand, there are so many different things they can align it with.”

Apart from the sports industry, there are similarities to the technology and entertainment industries, she noted.

The term ‘e-sports’ is basically used to describe video game competitions. Such gaming events are typically organized with a number of people competing — sometimes as a team or individually.

Professional sports teams, for example, are moving into e-sports. The Toronto Raptors have an e-sports team called the Raptors Uprising, which competes in the National Basketball Association’s 2K League. Twenty-three of the NBA’s 30 teams have a team in the e-sports league. 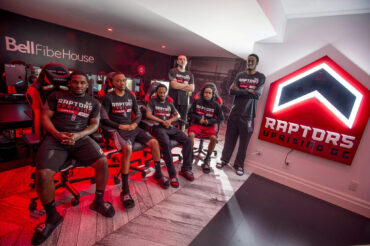 E-sports players can earn a base salary —a first-round pick in the NBA 2K league makes US$35,000 over a six-month contract — and then earn money through endorsement deals and sponsorship packages, as well as through advertising and marketing deals. Such deals in the virtual world work the same way as the real world, Giltrap explained.

“The landscape is just slightly different,” she said. “The legal landscape [and] the landscape in relation to regulations and authorities is sort of emerging and evolving.”

Carriers are used to insuring some of the risks linked to e-sports, such as personal accident and travel-related exposures. There are also general liability and events risks.

But then there more unique exposures, like cyber. Events are centred around the ability to be online and operating competitions in that space. There are also unique media and entertainment risks, since events have online presence but are broadcasting as well.

“You can break that down into lots of different areas,” Giltrap explained. “You have the game developers who own the intellectual property; you can filter that down, as they might run the events themselves or work with third parties whom they allow to run their event. Then, below that, you have the rest of the industry involved in broadcasting the content, either in line with the event or because they’re gamers and influencers.

The majority of e-sports revenue comes from sponsorship and licencing. “So within that ecosystem … those kinds of contracts and deals actually tend to drive a lot of the purchasing decisions and quite a lot of the need for insurance purchases,” Giltrap said.

“It’s a huge ecosystem. Within professional sports, you’re going to have totally different partners aside from the teams. So if you think about all the businesses that sponsor professional sports, it’s a massively broad area. So within e-sports, you have the games publishers; below that, you have just tons of people monetizing what is brand and lifestyle choices for Millennials and below at the moment.”

Insurance professionals may feel trepidation about jumping on board the bandwagon of a booming industry — things can be a bit unstable, or interest might wane. But Giltrap says the boom has happened and the industry is moving along at a stable clip. Two years ago, it wasn’t as organized or well-run as it is today.

“Some of the people who are avid industry watchers, they don’t think the growth is going to be as fast-paced as it has been. The boom has happened.”