Why insurers say auto premiums could come down

Auto premiums in Canada rose more than 10% last year as loss ratios continue to climb, but some carriers are thinking about what to do if auto revenues come back down, an industry watcher suggests.

“Some companies have indicated to us that they anticipate auto premiums declining over the next five years or so,” said Gordon McLean, senior financial analyst for A.M. Best Company Inc.

Some underwriters think a decline in premiums could come if improvements to automotive safety offset the impact of distracted driving and the escalating repair costs associated with today’s vehicles with cameras and sensors, McLean suggested during a presentation at the 13th annual Insurance Market Briefing – Canada this past Friday. 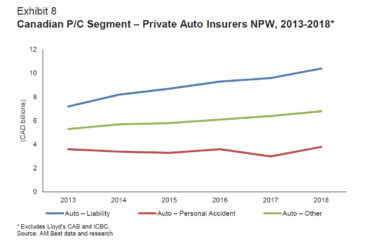 This has prompted insurers to “look at other segments of their books of business that they are looking to grow in order to offset the potential declines in what may be coming in the next five years,” McLean observed.

But for now, claims costs and premiums are rising for auto coverage.

A.M. Best reported Sept. 13 that Canada-wide, premiums for private passenger auto were 10.5% higher in 2018 than in 2017. That figure excludes the monopoly provincial crown corporations writing auto in British Columbia, Saskatchewan and Manitoba.

“The auto line remains susceptible to distracted driving, as well as the impact of fraud and escalating repair costs, each of which has negatively impacted both frequency as well as severity trends within the auto lines,” McLean said Sept. 13 during the briefing at the Sheraton Centre in Toronto.

“Following the removal of the 5% rate cap in Alberta, it looks like we may start to see progress on rates there,” he added.

In 2017, the Alberta government told the province’s Automobile Insurance Rate Board to not approve rate increases of more than 5%. That restriction applied across individual insurers’ books of business. It was renewed in 2018 but the government let it expired at the end of August 2019.

“I think the industry is hopeful,” A.M. Best senior director Greg Williams said of FSRA. “I think there are some good elements contained in their directives and priorities – innovation being one of them.”

Williams noted FSRA is proposing a file and use system for private passenger auto rates, “which would be a huge development in the Ontario market. I know it’s something that insurers have been pushing for. It seems to work in other places.”