Why road injuries have dropped 34% in this province

A combination of technology, legislation and behaviour change are contributing to a downward trend in road injuries and fatalities in Saskatchewan, including a substantial decrease last year, the Minister responsible for Saskatchewan Government Insurance (SGI) suggested at a press conference Friday.

“Behaviour change takes time, we know that,” Joe Hargrave said at the press conference alongside SGI’s senior vice president of traffic safety, Kwei Quaye. “The fact is thanks to technology, legislation and most importantly, driver behaviour, our roads are much safer today than they were even a few decades ago. 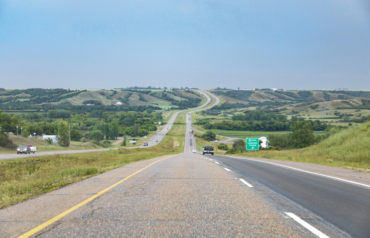 “We’ve seen substantial improvement even over the last 10 years,” Hargrave said. “We’ve seen progress, but we want to see more.”

There were substantially fewer people hurt or killed in collisions on Saskatchewan roads in 2018 than the previous 10-year average, SGI noted in a press release. Preliminary data for 2018 from SGI indicates 4,220 people were injured and 129 killed due to vehicle collisions on public roads in the province. This represents a 34% drop in injuries and a 9% drop in deaths compared to the yearly averages from 2008-2017 (injuries: 6,353, deaths: 142).

There was also fewer total casualties in 2018 across each of the ‘Big Four’ categories – impaired driving; distracted driving; speeding; and seatbelt use (or improper occupant restraint, such as seatbelts, car seats and booster seats) – compared to the 10-year average. The ‘Big Four’ are the main contributors to vehicle injuries and fatalities.

“We’re going to continue our awareness campaign on distracted driving and impaired driving,” Hargrave said. “Those are two of the ‘Big Four’ that are causing a lot of the accidents and injuries.”

Tyler McMurchy, manager of media relations with SGI, said Wednesday “it seems like attitudes in this province are changing, especially when it comes to impaired driving and distracted driving. People seem to be more vocal in their criticism around those risky behaviours.”
As well, “we would like to think overall that people are driving more safely,” McMurchy said. “We believe what we are seeing is a culmination of efforts on many fronts: legislation, enforcement, awareness, technology and partnerships.”

2012 saw the largest number of injuries and deaths over the past decade, with 183 people killed and more than 7,300 injured. It prompted the formation of a Special Committee on Traffic Safety. The committee’s recommendations led to a number of new pieces of legislation and traffic safety initiatives over the following years, including:

The cost of insurance is based on the likelihood the vehicle will be involved in a collision or stolen and also the cost of repair if the vehicle is damaged in a collision. Injury and fatality claims are part of it, McMurchy said, but so are other factors, including:
“So, premiums aren’t decreasing, but the safer roads are one the reasons Saskatchewan drivers haven’t seen the same level of increases that other provinces have,” McMurchy said.
Print this page Share