Overland flood insurance might be easier to sell if homeowners could figure out how vulnerable their properties are.

“What would be most useful for homeowners is they would be able to search their postal code or property address and be able to get information that is specific to their property,” Dan Henstra, a University of Waterloo political science professor, said Thursday in an interview.

Overland flood insurance was generally not available to homeowners in Canada until 2015. 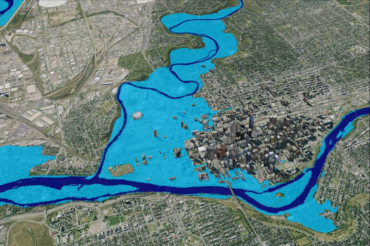 “For the vast majority of people, they are able to get coverage, it’s just that they are not thinking about it very much,” said Henstra. “We are arguing that one of the problems is, they don’t know their risk and it’s actually very difficult to find it out.”

Henstra conducted a study on flood mapping along with professor Jason Thistlethwaite and PhD candidate Andrea Minano, both on the University of Waterloo’s environment faculty. That study, announced Thursday, appears in the journal Natural Hazards and Earth System Sciences.

The study found flood mapping information in Canada was inadequate, incomplete, hard to locate and varied widely from province-to-province.

The researchers examined the available, online information of more than 300 communities across Canada that are classified as being at a high-risk for flooding.

A good flood map should be easy to understand for people who are not insurance or geography experts, Henstra suggested in an interview. “Even using the term ‘20-year flood zone’ is probably not adequate.”

By contrast, in some European nations, a property owner could go to a website, type in their address or postal code and find out information on how frequently the property is expected to flood or its elevation above the nearest body of water, Henstra suggested. “In Austria, Belgium, Germany and the U.K., citizens have access to much better quality flood risk information than in Canada.”

For example, Britain has a website that lets users enter their postal codes and get reports on how vulnerable their properties are to flooding, Henstra said.

In Canada, industry estimates indicate about 10% of households are in areas where overland flood coverage is not available at affordable rates.

“There are policy discussion going on right now about what to do about these properties but for the vast majority of people, they are able to get coverage, it’s just that they are not thinking about it very much,” Henstra said.

3 Comments » for Why some homeowners aren’t buying flood insurance