About one-third of 800 Canadian P&C insurance professionals surveyed by Canadian Underwriter in June are enthusiastic to return to the office, and that’s mainly because they want to see their friends again. 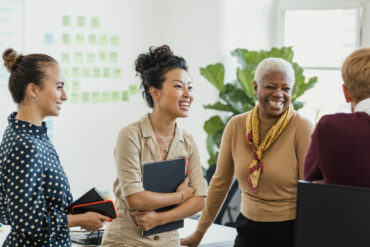 CU asked an open-ended question about the reasons for their enthusiasm.

Those who expressed a desire to go back said little about the potential for efficiency or greater productivity, which some employers cite as the advantages of returning to work. From the employees’ perspective, the desire to return to work is to see their friends again.

“People!!!” one person responded in writing, explaining why they would feel enthusiastic about a return to the office. “Interaction with others. Small talk.”

Another reader said they “would like to pop into the office and see people again in person.”

“There are things I really like about working from home and the flexibility it offers a single mom,” wrote one respondent. “But I miss the social interaction with my colleagues and clients.”

Another said they would like to go back to the office one day per week just so they could see the people they work with. “But [I] prefer to continue working from home with increased productivity,” they noted.

In some cases, the desire for personal interaction was a reaction to fatigue associated with virtual interactions. Some noted the number of virtual meetings they were attending and how they were tired of talking to people over a screen.

“People need to have that social interaction,” one person said. “I am Zoomed out. Now everything takes too long to get done after exchanging many emails. My cell phone has become a ‘bottleneck.’”

Another person’s answer reflected the benefits commonly put forward by company managers and executives. For example, getting back to the office is critical for the development of the less-experienced insurance professional.

“I’m happy to work at home a few days a week,” the respondent wrote. “But as time passes, I see more and more how much we are losing by working at home. Junior staff do not get the same opportunity for passive learning. Brainstorming and problem solving is less creative and less efficient. As staff come and go, relationships built before the pandemic can no longer fully sustain culture.”

In fact, nearly four-in-ten P&C insurance professionals (39%) reported they were either “not enthusiastic” (21%) or “not at all enthusiastic” (18%) about a return to the office environment, assuming it is safe to do so.

That’s eight percentage points higher than when CU first asked the question in January 2021. Back then, only 31% of respondents weren’t keen about an office return (19% were not “enthusiastic;” 12% were “not at all enthusiastic”).

For one respondent, the COVID-19 pandemic has presented a chance to set up proper work/life balance protocols.

“We do not need to go back to the office as much as before this is certain,” they wrote when asked for their thoughts on returning to the office in the survey. “What we need [is] better work/life balance. Now we have the unique opportunity to get this right. Let’s not blow it!!”