Why wildfire is moving into ‘peak peril’ range

Overall, in both Canada and the United States, wildfire risks are starting to move from what the insurance industry traditionally thought of as an attritional risk — an event that happens every year but not a solvency-level event — to a “peak peril” type of risk. “Just like earthquake, hurricanes, and even in some cases, severe convective storm,” said Michael Young, vice president of model product development at RMS.

“We see evidence of that changing over time in Canada,” Young said, “because when you look at the loss curve of industry losses over the last 30 years, you see a hockey stick-shaped curve, one that you classically see in climate change talks.”

Wildfire risk is becoming more of a peak peril for a variety of reasons, including exposure growth, the evolution of the hazard, and the changing vulnerability of structures.

In both Canada and the U.S., the last decade or so has seen exposure growth as populations grow 3-5% per year. “You have to build more houses and you’re going to build those houses on the edges of cities,” Young said. The edges of these communities tend to be in northern Alberta and British Columbia, at the boundary of the wildland-urban interface (WUI), where structures such as homes and buildings meet wildland. “Because you are pushing into native forested lands… you can see escalation of that risk overall.” 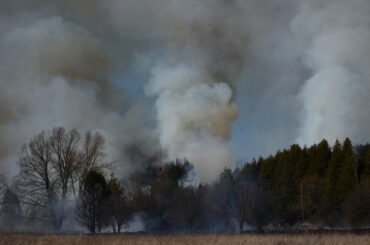 Young spoke to Canadian Underwriter about five years after Canada’s costliest disaster — the Fort McMurray, Alta., wildfire that cost the industry about $3.6 billion in losses. He was discussing how the landscape is changing for wildfire risks in Canada.

Wildfire risk in Canada also varies by province, something that would be of interest to insurers, particularly if they are writing coast-to-coast. For example, in Alberta, a large contributor to overall wildfire risk levels is linked to specialty product lines — two-thirds of the risk is related to oil and gas in northern Alberta.

Looking at just residential areas, Saskatchewan “pops up as a high-risk province overall because it does have enough of the WUI that interfaces with some of the populated areas like Regina and other cities like that,” Young said. He added it’s a risk when you aggregate it on a province-wide basis.

Although the western provinces are typically associated with wildfire risk, historically, major wildfires have also occurred in the Atlantic provinces, Ontario, and Quebec. “There is definitely measure risk, particularly up in northern Ontario,” Young said.

Overall, RMS estimates that eastern provinces represent 5% of the overall countrywide wildfire risk. “That’s something important to an insurance company if they are writing…in all 10 provinces. [Insurers] should make sure they are paying attention to their risk factors all the way from one coast to the other coast.”

The effects of climate change are starting to change wildfire patterns, too. “The severity of those fires tends to be larger and therefore more intense, with a higher potential for losses overall,” Young said. “The scientific community is in broad consensus that wildfires are one of the [perils] that will start seeing broad effects, secondary effects, sooner than other types of natural catastrophe perils over time.”