Wildfire loss to oilsands at least 30 million barrels worth $1.4 billion 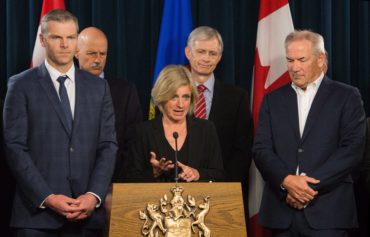 Premier Rachel Notley speaks to the media along with Suncor President and CEO Steve Williams, right, and President and CEO Canadian Association of Petroleum Producers Tim McMillan, left, at the Alberta Legislature in Edmonton, Alberta, on Tuesday, May 10, 2016. They met to discuss recovery strategies, including prioritizing restarting industrial activities, moving forward in Fort McMurray after the devastating wildfires. THE CANADIAN PRESS/Amber Bracken

Some of the largest oilsands producers in the province were forced to shut down or curtail operations last month as 80,000 residents of Fort McMurray evacuated the city to escape the fierce blaze, which has yet to be extinguished.

Analyst Martin King of FirstEnergy Capital estimates the industry’s production loss at $1.4 billion, while Nick Lupick, an analyst for AltaCorp Capital, puts the value of the losses so far at almost $1.6 billion. Both said Wednesday that they expect their numbers to grow.

Behind Thickwood, results of the #ymmfire. #ymm pic.twitter.com/OZP5vkt2L2

“It sounds like there have been some pipeline clogging issues on some of these projects,” said King. “I guess when the bitumen cooled it hardened and so they’re having trouble getting stuff down these pipes right now.”

King said his wildfire cost estimate is based on a production loss of about 37 million barrels, about half in the form of raw bitumen, which must be mixed with light oil to facilitate flow in a pipeline. The other half is much more valuable synthetic crude.

Lupick said he based his calculation on lost production of about 28 million barrels but with a higher proportion in the form of synthetic crude, which commands prices similar to West Texas Intermediate oil, thus delivering the higher dollar figure.

“Based on an outage of three weeks during the fires on average for all of the affected projects, the total lost revenue works out to be roughly $1.6 billion,” he said. “Made up of roughly $1.05 billion of SCO and $550 million of bitumen revenue.”

He said he expects the final production loss to grow beyond 30 million barrels because of delays in restarting projects and the fact that Syncrude Canada must complete a maintenance turnaround at its upgrader before returning to normal operations.

Lupick estimated Suncor Energy (TSX:SU) has lost about 21 million barrels of output from its own oilsands operations as well as from Syncrude, in which it has a majority stake.

Those barrels would have been worth about $700 million, he said, adding an outage at Suncor’s Edmonton refinery that caused gasoline shortages in Western Canada would take the loss to about $800 million.

In a recent report to investors, analyst Paul Cheng of Barclays said about half of the one million barrels per day of production interrupted by the fire has been restored.

“By the end of June, we estimate the majority of production would be back online, with about 300,000 bpd still ramping up or undergoing planned turnarounds, and operations basically back to normal by mid to end of July, assuming no new shut-ins from ongoing fires,” he wrote.

We’re proud to announce that Suncor personnel donated more than half a million to #ymmfire relief pic.twitter.com/BPJ1vxpiH6

Most packed I've ever seen council. Standing room only. An overflow room next door full too. #ymm #ymmfire pic.twitter.com/IPvVxBCOjq

A new normal returning to #ymm Fire damage is visible behind Codey Brace as he mows his neighbour's lawn #ymmstrong pic.twitter.com/NuzEWG3XOS