BANNING, Calif. – A wildfire that tore through brush east of Los Angeles forced 700 people from their homes for several hours Tuesday and destroyed a small building, officials said. 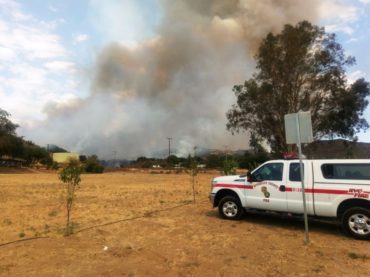 The fast-moving fire prompted the evacuations as it raced through 1.5 square miles of drought-dry hills near Banning, the Riverside County Fire Department said.

It was 10 per cent contained by nightfall, and the evacuations, most of which were from a mobile home park, were cancelled.

Two people were taken to hospitals with minor injuries.

#bogartfire while some loss cannot be avoided with the rapid advance of the fire front, he… https://t.co/jmn1LKVvkh pic.twitter.com/W82fzbkE4Z

An assisted living centre with 10 seniors had to be evacuated as flames came within about 300 yards.

“We have some in wheelchairs, some in walkers, and some get along pretty well on their own,” Richard Feenstra, owner of Cherry Valley Lodge, told the Riverside Press-Enterprise. “It took about 30 minutes to get everybody out of the building and across the street.”

The blaze erupted shortly before 12:30 p.m. in the unincorporated Cherry Valley area and has thrown up a line of 25-foot-high flames. Winds gusting to about 20 mph and tinder-dry fuel are helping propel the blaze.

More than 300 firefighters and more than a dozen aircraft are battling the flames.

Officials did not give a cause, but said they were seeking witnesses to the activities of children near the gate to a nature park where the fire started.

This is Tanker 10 Air Carrier out of New Mexico making a drop on the California fire
(Pic via @KTLA chopper feed) pic.twitter.com/O7X9k3TdZJ

.@CAL_FIRE helos pick up water at a pond in the center of the Highland Springs mobile home park #BogartFire pic.twitter.com/IZUyKAol6Y