PENTICTON, B.C. – Fire crews appear to have the upper hand on a wildfire that roared to life Tuesday in the south Okanagan community of Kaleden, B.C. 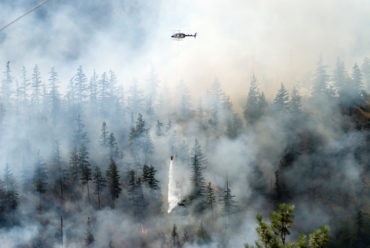 BC Wildfire Service spokeswoman Justine Hunse says the fire that has scorched 6.5 hectares is still classified as uncontained, but crews have boxed in the blaze with a 15-metre perimeter.

The fire destroyed one home Tuesday and a member of Kaleden’s volunteer fire department says several outbuildings were also lost.

Eighteen homes in the community of 1,200 remain under a mandatory evacuation order, and residents in another 165 homes are on evacuation alert.

Totally unofficial, but looks like south flank of #Kaleden fire is contained. pic.twitter.com/k73wBfzsDQ

The fire is believed to be human-caused, but it remains under investigation.

A special weather statement from Environment Canada warns of unseasonable heat over most of southern British Columbia, including the Okanagan and Similkameen, with temperatures reaching to the high 30s for the next several days.

The system also includes afternoon winds of up to 20 kilometres per hour, and firefighters say they will be watching closely to ensure gusts don’t fan spot fires around Kaleden.