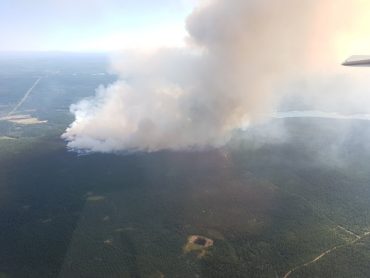 The wildfire has scorched more than 12 square kilometres of bush near 100 Mile House, B.C. Credit: @BCGovFireInfo.

The BC Wildfire Service says heavy smoke makes it difficult to determine the exact size of the fire, but it has grown exponentially since being reported Thursday along the Gustafsen forest service road about 10 kilometres west of 100 Mile House.

“The conditions we are seeing out there are just so hot and dry, that has really driven the behaviour we have seen out there,” said BC Wildfire Service chief information officer Kevin Skrepnek.

By Friday, the rapid growth of the fire had prompted the regional district to issue evacuation alerts for the roughly 1,800 properties in the 108 Mile and 105 Mile areas west of Highway 97.

A reception centre for evacuees has been opened at a local curling rink in 100 Mile House.

Cariboo Regional District chairman Al Richmond said sprinkler protection systems set up on homes in the direct path of the fire did their job.

“The fire has burned past them and those structures are still in place, so those units … protected those homes for those folks,” he said.

The situation is serious, Richmond added, but he urged people not to overreact.

“We had a fellow going door to door in some communities (Thursday) telling people to get out and so we had to try to hunt him down with the RCMP to stop that,” he said.

Skrepnek said 120 firefighters have been assigned to the blaze and were working to build guards along the eastern flank of the fire, nearest to 105 Mile and 108 Mile.

More equipment was enroute, although heavy smoke and poor visibility could hamper the use of air tankers, he said.

A cause of the fire is under investigation.

Couple picture of the ongoing fire just west of 100 mile house. Multiple fire depts are currently fighting and putting it out. pic.twitter.com/Dc2p7ZirPR

33 properties are under evacuation order as a wildfire spreads west of 100 Mile House, fire is now estimated at 750 ha. #Cariboo #BCwildfire pic.twitter.com/Hz8eHmaS3d

Not yet under control and almost 400 hectares. Big thanks to all fighting this fire! 100 Mile House fire. pic.twitter.com/ZZEpISlsMV