SALT LAKE CITY – Utah firefighters braced Wednesday for more high winds as they try to slow a stubborn wildfire that has burned 13 homes and forced the evacuation of 1,500 people from a ski resort town.

Firefighters hope to put areas with intense blazes at the fire’s southern end so residents can return to homes in the town of Brian Head. Homes there have been evacuated since June 17 since authorities said the fire was started by someone using a torch tool to burn weeds on private land. 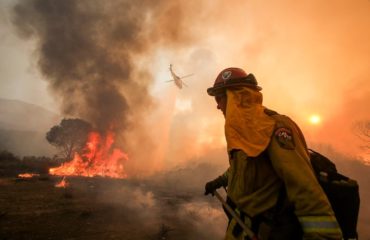 The fire is the largest in the nation at 201 square kilometres.

The blaze is one of several in the West. Crews in California were making gains against two new fires that spread quickly, and firefighters in Idaho battled five lightning-sparked wildfires burning in grass and brush.

In Arizona, a wildfire that has charred more than 72 square kilometres burned and forced the evacuation of the town of Mayer, population about 1,400, and other areas as a precaution.