It will ‘take until the end of the year’ for Lake Ontario water level to drop to average level: Toronto city staff

The water level of Lake Ontario at Toronto will not drop to its average level until the end of the year and frost this winter could “further exacerbate” infrastructure damage, though the exact cost of infrastructure damage has yet to be determined because some of that infrastructure is still under water, Toronto city staff said in a report on the agenda for this week’s council meeting. 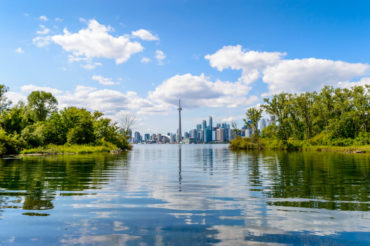 “Lake Ontario levels began rising to above average level in April as snowmelt and an exceptionally rainy spring have increased water supply to the basis,” staff from the City of Toronto department of parks, forestry and recreation wrote in a report dated June 27.

Ferry service access to Toronto Island Park has been restricted since May. At the park, more than 800 residents and 30 businesses “have been forced to adapt to rising waters,” staff wrote in the report, titled Damages Sustained from Rising Lake Water Levels and Restoration Plans for Waterfront Parks.

“Capital costs for remediation, mitigation and adaptation cannot be fully estimated at this time as the infrastructure is under water and cannot be inspected,” according to the report.

In that report, which is being considered by full council in its meeting starting Tuesday, staff are making three recommendations. One is to report, during the third quarter of next year, to the city council executive committee with “a comprehensive inventory of all capital costs” associated with the flooding “including repair of existing infrastructure and mitigation strategies.”

“In late May and early June, Lake Ontario remained above the highest water levels recorded at any time since 1918,” according to the report.

“While water levels are receding, it is expected that they will not return to pre-flood levels (75.5m) until well into summer,” parks, forestry and recreation staff wrote in the report. “It will take until the end of the year for the lake to return to an average water level of 74.5m.”

Staff have estimated that to the end of the July, the cost to the city will be about $4.881 million. This includes $4.9 million from revenue losses from ferry operations and permit cancellations and other costs for total costs of $5.365 million, which is partially offset by programming savings of $483,000.

Staff added “there are still uncertainties with the final costs.”

“If high ground water persists through winter, frost will further exacerbate the infrastructure damage,” according to the report. “A full asset evaluation to assess the damage and associated costs will occur when the ground water recedes.”

City staff are recommending that the full council authorize the temporary suspension of rent and license fees from Toronto island residents and businesses. They also recommend that City Council “direct” the general manager of parks forestry and recreation – in consultation with Toronto Region Conservation Authority – to “report back to the” Nov. 29 meeting of city council’s executive committee “with a comprehensive inventory of all operating costs, projected to year end associated with the spring flooding of 2017.”