Nearly three months after torrential downpours gave rise to more than $100 million in insured losses in and near Windsor, the Ontario government announced Monday it has expanded the number of property owners eligible for disaster relief. 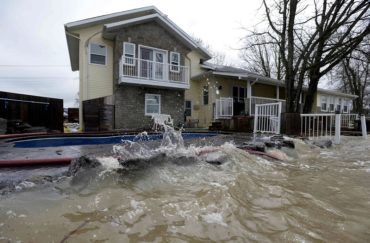 Rising water from the Ottawa River is nearly level with the deck and swimming pool at a home in Rockland, Ont., about 40 kilometres east of Ottawa, on Sunday, May 7, 2017. Insurance industry experts say many Canadian homeowners aren’t insured for flooding and could be left footing at least part of the bill after heavy rains hit parts of Quebec and Ontario. THE CANADIAN PRESS/Justin Tang

“Expanding the original activation area will allow more residents who were affected by the flood to submit claims for assistance,” the provincial government said in a press release.

Quoting Catastrophe Indices and Quantification Inc. (CatIQ), Insurance Bureau of Canada reported in September that rain storms in late August “resulted in more than $124 million in insured damage” in and near Windsor. Up to 290 mm of rain fell in some areas, bringing flooding to Windsor and parts of Essex County, IBC said at the time.

Under the Disaster Recovery Assistance for Ontarians program, the province provides money – for emergency expenses as well as repairs and replacements – to homeowners, farmers, tenants, small companies and not-for-profit entities – after natural disasters. The program is not intended to replace private insurance.

Related: Will feds get involved in flood coverage for high-risk homes?

Damage from sewer backup – available as an option on some home insurance policies – “is not eligible” under Disaster Recovery Assistance for Ontarians “except under special provisions for low-income households,” the Ontario government noted Nov. 20.

Many homes in the Windsor area were flooded in late August “because of sewer backup,” said Lisa Gretzky, NDP MPP for Windsor West, at the legislature at Queen’s Park Sept. 14.

Overland flood was generally not covered on residential property insurance policies before 2015, when major Canadian property & casualty insurers started offering it. Both Insurance Brokers Association of Canada and Insurance Bureau of Canada have said there should be public sector involvement in insuring flood for Canadian homeowners.

“There are quite a number of houses and developments in Canada which are on floodplains,” IBAC chairman Robert Harrison said in an interview Friday.

After Hurricane Hazel, which caused fatal flooding in the Toronto area in the fall of 1954, “Ontario said, ‘Okay, that’s it. No more building in flood plains,’” Harrison noted.

“Ontario has done a pretty good job – some of the other provinces not as good a job – from a regulatory perspective,” Harrison added after a round table held Nov. 16 in Regina.

Participants at the round table were “discussing the requirements for developing a sustainable financial management system for flood risk,” a Public Safety Canada spokesperson told Canadian Underwriter at the time. The round table was hosted by Ralph Goodale, Canada’s public safety and emergency preparedness minister, and Saskatchewan government relations minister Larry Doke.

“Some kind of a public-private partnership is going to be the solution,” Harrison told Canadian Underwriter Friday. “It’s not going to be inexpensive. We don’t know where this is going to get to.”