Winnipeg scaled back flood preparations on Friday after Manitoba officials moved to divert water around the city. 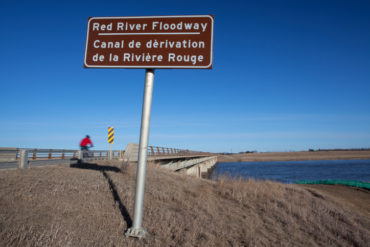 The gates of the Red River floodway were lifted in anticipation of the river cresting in the city sometime on the weekend.

City officials said activating the floodway meant there were 25 properties at risk, down from 50.

The province issued a number of flood watches and warnings for smaller creeks and rivers due to ice jams.

Officials said the ring dike in the border town of Gretna was being partially closed due to flooding on the Pembina River.

Canada Border Services said the crossing into the United States was open on the Canadian side, but closed on the American side due to flooding.

“Ice is still in place on many rivers and tributaries. The risk of ice jamming in drains and small tributaries is present as flows start to rise. Ice jamming is developing on southern Manitoba’s major rivers,” the province said in a flood bulletin.

“Temperatures across southern Manitoba are above average, resulting in more melting and runoff.”

Forecasters have said soil moisture is very high following a wet fall, and river and lake levels are above normal in some areas.

Officials said they’ve put flood-fighting gear – including steamers and pumps – in the southwest and are in touch with municipal emergency co-ordinators.