VANCOUVER – A student residence under construction at the University of British Columbia could set a new precedent for wooden towers in Canada. 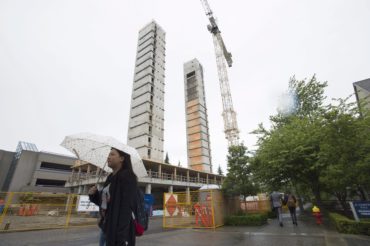 A new building is being built at the University of British Columbia campus in Vancouver, B.C., Monday, June, 13, 2016. The 18-storey Brock Commons is intended to show developers and the public that wood can be equally as effective as steel or concrete, better for the environment and support the country’s forestry industry. THE CANADIAN PRESS/Jonathan Hayward

The 18-storey Brock Commons is intended to show developers and the public that wood can be as effective as steel or concrete, better for the environment and support the country’s forestry industry.

“This project should effectively demonstrate that mass wood structures can be commonplace,” said Russell Acton, principal architect on the project.

While 17 floors of Brock Commons will be built with mass timber, the building’s base and two cores are made of concrete.

National building code regulations currently limit wood structures to four storeys. However, with new research and engineering, some provinces have allowed architects to push the boundaries.

In British Columbia, provincial codes have allowed wood towers to reach six storeys since 2009. Codes in Quebec and Ontario have followed suit.

Timber-related industries hope Brock Commons will help make a case for building codes to allow 10- to 12-storey wooden structures in the future.

“(As) a building like this becomes a reality, it really paves the way for additional projects across the country, probably throughout North America and throughout the world,” said Lynn Embury-Williams, executive director of the Canadian Wood Council’s Wood Works BC program.

However, building with wood comes with a higher price tag.

At $51.5 million, Brock Commons cost eight per cent more than if it were constructed with traditional steel and concrete, Acton said.

The Binational Softwood Lumber Council, Forestry Innovation Investment, Natural Resources Canada and the B.C. government provided funding to the university to make up for the higher price.

If Brock Commons is successful in inspiring more wood towers, demand would bring down the costs, making wood a competitive alternative to other materials, Acton said.

“Wouldn’t it be great for B.C. to be a leader in what will be a growing industry,” he said.

Canada has not been a global leader in the development of wood towers, but it is certainly catching up, said Thomas Tannert, professor of wood science and civil engineering at the University of British Columbia.

The environmental benefits of building with wood are a major incentive encouraging research in the field.

“We tend to forget that the building industry is responsible for 40 per cent or more of greenhouse gas emissions, solid waste production and carbon storage. If we tackle the issue of the construction industry by using a renewable material, we can really make a big contribution to slowing down climate change,” Tannert said.

Using a renewable resource like timber that is harvested and produced in a sustainable way can significantly cut back on the emissions typical produced in manufacturing and construction, Tannert said.

There are also structural benefits to using timber.

Massive wood beams are naturally fire-resistant, charring on the exterior while insulating the centre, Tannert said.

The impact of an earthquake on a structure is dependent on how heavy it is, meaning a lighter wood structure is less vulnerable than steel and concrete, Tannert said.

The greater challenge in building with wood is how it settles and shrinks compared to concrete and other unnatural materials.

For Brock Commons, designers had to account for 48 millimetres of settling that is expected to occur after construction is over.

While there is great interest in the construction of the project, Acton said when it’s completed next year it will look like any other residential building.