In an auto accident claim involving back-to-back crashes, a woman who lost both her legs after being hit by a car is barred from suing the driver because the car that had carried her to the scene of the accident was driven by her employer. 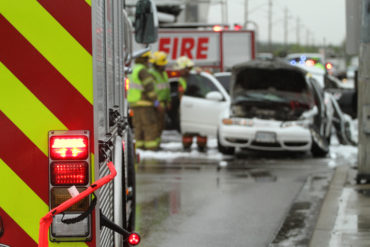 “The circumstances of this particular case are unique, if not exceptional,” Ontario Superior Court Justice Graeme Mew noted in his ruling in Heft v. Marrocco, released Monday

In December 2010, Santanna Marrocco was involved in two collisions in less than an hour north of Toronto.

Many parties (including the municipality) were involved in multiple lawsuits that followed. Defendants included Brodie and the owner of Brodie’s vehicle, TD Auto Finance Services Inc.

In the lawsuit against Brodie, Marrocco alleged that Brodie “had been at fault in the first collision and that the second collision, involving Mr. Heft, was connected to the first, such that Doris Brodie remained at least partially liable for the consequences of the second collision,” Justice Mew wrote.

Ultimately, TD and Brodie succeeded in defending themselves on the grounds that Brodie was Marrocco’s employer. Brodie and Marrocco had been delivering a floral arrangement to a customer of Brodie’s firm, Grand Entrance Designs.

Ontario’s Workplace Safety and Insurance Act essentially protects employers being sued by employees for personal injuries resulting from accidents occurring in the course of employment. This is because employers are supposed to pay premiums for workers’ compensation to the Workplace Safety Insurance Board, which is a no-fault system.

At the time of the 2010 collision, Brodie’s business was not registered with WSIB, Justice Mew observed. But the following March, Brodie submitted a voluntary registration with WSIB, making the registration effective Jan. 2, 2010, or nearly a year before the accident.

“It is understandable that the plaintiffs should feel aggrieved at the prospect of having to pay costs,” Justice Mew noted. “This is particularly so, as any award of costs will have to be paid out of the settlement funds obtained by the plaintiffs to provide for the medical, rehabilitation and other services and assistance” required by the accident victim.