Flooding in China in July caused an estimated US$33 billion in economic losses, but claims payouts represented less than 2% of the cost, according to Impact Forecasting’s monthly Global Catastrophe Recap. 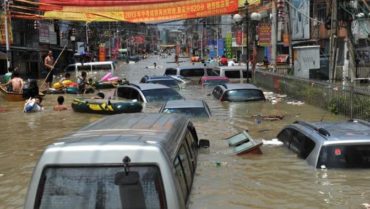 The flooding left a total of 764 people dead or missing and more than 800,000 homes and other structures were damaged or destroyed. Photo: @ClimateNexus.

The report from Impact Forecasting, Aon Benfield’s catastrophe model development team, was released on Thursday. It said that data from China’s Ministry of Civil Affairs indicated that a combined total of 764 people were left dead or missing, and more than 800,000 homes and other structures were damaged or destroyed.

Much of China endured substantial seasonal “Mei-Yu” rainfall that led to a dramatic worsening of flooding along the Yangtze River Basin and in the country’s northeast, Impact Forecasting said in a press release. Nearly 20 provincial regions were impacted by floods that have been ongoing in some areas since May.

Considerable damage to the agricultural sector was also prevalent with an estimated 18 million acres of cropland damaged by floodwater. Total combined economic losses were estimated at US$33 billion, with at least US$28 billion occurring in the Yangtze River Basin. The China Insurance Regulatory Commission cited insurance claims payouts representing less than 2% of the economic cost, with most of the claims from lost agriculture.

“While it was expected that China would see above normal rainfall during the peak monsoon months with such a strong El Niño, the intensity and scope of what transpired from the associated floods were at a magnitude not seen in nearly two decades,” said Adam Podlaha, global head of Impact Forecasting, in a statement. “The flood peril is one which is becoming better understood by catastrophe modellers, and the industry is better prepared than ever to help create awareness of the risks associated with such large events.”

In Canada, a series of storms from July 8 until Aug. 1 contributed to elevated thunderstorm and flood activity and damage in Alberta, Saskatchewan, Manitoba, Ontario and Quebec, the statement said. “Total combined economic and insured losses were expected to well exceed US$100 million once all assessments are completed,” with each of the events expected to reach “well into the millions” in total economic and insured losses (in U.S. dollars).

In the first storm, severe weather left widespread damage to property, vehicles and crops on July as up to golf ball-sized hail and straight-line winds were reported across southern Ontario. More than 39,000 customers were without power due to strong winds toppling trees and power lines, the report said, and localized areas of flooding were also reported.

That same day through July 11, powerful thunderstorms and torrential rainfall led to property damage throughout portions of Alberta, Saskatchewan and Manitoba. Some of the worst storm damage was noted in the greater Calgary and Edmonton metro areas and in Estevan, Sask. A local state of emergency was declared in the towns of Estevan, Arborfield, and Carrot River. Most of the storm damage in Manitoba was attributed to fallen trees and power lines due to straight-line winds.

Inclement weather prompted flooding rainfall and large hail across Alberta and Saskatchewan on July 15-16 that led to major damage in some areas. The highest concentration of damage was noted in the greater Calgary and Arbour Lake areas of Alberta, where windows and siding was smashed by up to tennis ball-sized hail, the report said. Flooding was reported in Swift Current, Sask.

Additional thunderstorms impacted the southern Prairies from July 18-20 as large hail and damaging winds struck parts of Alberta, Saskatchewan and Manitoba. Most of the property damage was a result of shattered windows or fallen trees onto homes, businesses and vehicles, Impact Forecasting reported. Some parts of the greater Calgary area noted isolated flooding.

The combination of very hot daytime temperatures and abundant moisture led to widespread severe weather in parts of Ontario and Quebec on July 27. Both the Toronto and Quebec City areas were inundated by up to baseball-sized hail and flash flooding. Thousands of properties and vehicles sustained varying levels of storm damage.

Lastly, severe thunderstorms led to widespread damage in the Prairies from July 30 to Aug. 1. The most considerable impacts were noted in Alberta, Saskatchewan and Manitoba primarily as a result of large hail. Thousands of homes, businesses and automobiles incurred shattered windows or dented siding, the report said, adding that isolated flooding was also reported, including in Fort McMurray, Alta.

In the United States, six separate outbreaks of severe convective storms and flash flooding were recorded from the Rockies to the East Coast, with total combined economic losses “minimally estimated” at US$1.5 billion. By contrast to China, public and private insurers were anticipated to record losses nearing US$1 billion, or 67% of overall economic costs. It was this active weather pattern that contributed to elevated thunderstorm and flood activity and damage in Alberta, Saskatchewan, Manitoba, Ontario and Quebec.

Events that occurred elsewhere during the month of July include: