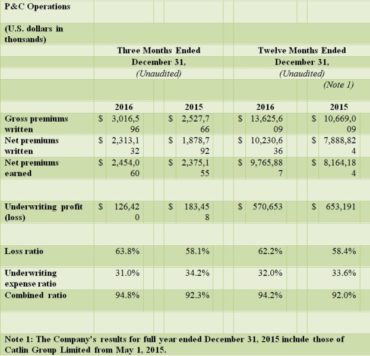 The Reinsurance segment GPW increased dramatically by 159.5% in the most recent quarter from the prior-year quarter. The increase was primarily due to significant new proportional business in Bermuda in the Property Treaty line of business offset by cancellations in Bermuda and London in the Casualty line of business, XL Group reported.

“2016 was undoubtedly a challenging year,” XL Group chief executive officer Mike McGavick said in the statement. “Our results were impacted by both a disappointing start as well as a number of significant catastrophe losses throughout the year and in the fourth quarter in particular.”

At the same time, McGavick continued, as the year developed, underlying strengths continued to emerge. “For example, our grinding focus on efficiency and underwriting quality produced a lower expense ratio and an improved loss ratio excluding catastrophes,” he said. “We were even able to grow a bit – bolstered by our new market presence our fourth quarter P&C net premium earned, for example, was up 3.3% over the prior year quarter. All in, we feel we took important steps in the year and, despite challenging market conditions, are very much looking forward to 2017.”