SAN FRANCISCO – Computer hackers swiped personal information from at least 500 million Yahoo accounts in what is believed to be the biggest digital break-in at an email provider. 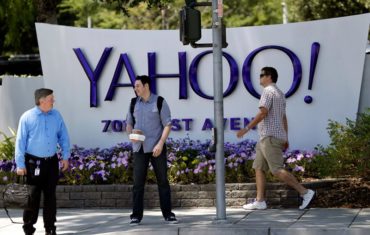 FILE – In this June 5, 2014, file photo, people walk in front of a Yahoo sign at the company’s headquarters in Sunnyvale, Calif. Yahoo says the personal information of 500 million accounts have been stolen in a massive security breakdown that represents the latest setback for the beleaguered internet company. The breach disclosed on Thursday, Sept. 22, 2016, dates back to late 2014. Yahoo is blaming the hack on a “state-sponsored actor.” (AP Photo/Marcio Jose Sanchez, File)

The breach Thursday dates back to late 2014, raising questions about the checks and balances within Yahoo – a fallen internet star that has been laying off staff to counter a steep drop in revenue during the past eight years.

At the time of the break-in, Yahoo’s security team was led by Alex Stamos, a respected industry executive who left last year to take a similar job at Facebook.

Yahoo didn’t explain what took so long to uncover a breach that it blamed on a “state-sponsored actor” – parlance for a hacker working on behalf of a foreign government. The Sunnyvale, California, company declined to explain how it reached its conclusions about the attack, but said it is working with the FBI and other law enforcement as part of its ongoing investigation.

MOST ACCOUNTS EVER STOLEN

“This is a pretty big deal that is probably going to cost them tens of millions of dollars,” predicted Avivah Litan, a computer security analyst for Gartner Inc. “Regulators and lawyers are going to have a field day with this one.”

Litan described it as the most accounts stolen from a single email provider.

Last month, the tech site Motherboard reported that a hacker who uses the name “Peace” boasted that he had account information belonging to 200 million Yahoo users and was trying to sell the data on the web.

Yahoo is recommending that users change their passwords if they haven’t done so since 2014. The company said the attacker didn’t get any information about its users’ bank accounts or credit and debit cards.

News of the security lapse could cause some people to have second thoughts about relying on Yahoo’s services, raising a prickly issue for the company as it tries to sell its digital operations to Verizon Communications.

That deal, announced two months ago, isn’t supposed to close until early next year. That leaves Verizon with wiggle room to renegotiate the purchase price or even back out if it believes the security breach will harm Yahoo’s business. That could happen if users shun Yahoo or file lawsuits because they’re incensed by the theft of their personal information.

Verizon said it still doesn’t know enough about the Yahoo break-in to assess the potential consequences. “We will evaluate as the investigation continues through the lens of overall Verizon interests, including consumers, customers, shareholders and related communities,” the company said in a statement.

At the very least, Verizon is going to need more time to assess what it will be getting into if it proceeds with its plans to take over Yahoo, said Scott Vernick, an attorney specializing in data security for the law firm Fox Rothschild.

“This is going to slow things down. There is going to be a lot of blood, sweat and tears shed on this,” Vernick said. “A buyer needs to understand the cybersecurity strengths and weaknesses of its target these days.”

Investors evidently aren’t nervous about the Verizon deal unraveling yet. Yahoo’s stock added a penny Thursday to close at $44.17. But the Verizon sale represents a sliver of Yahoo’s total market value, which primarily consists of a stake in Chinese e-commerce leader Alibaba Group currently worth $42 billion.