You don’t always have to be first in innovation 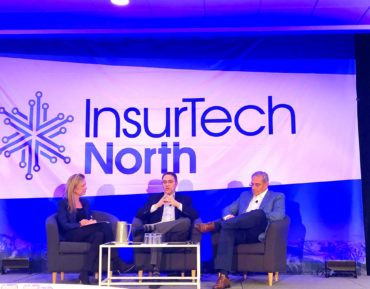 From left, Jennifer Reynolds moderates a panel with RBC’s Rino D’Onofrio and Rowan Saunders from Economical at InsurTech North in Toronto May 23.

It can be beneficial to sit back, have someone else be innovative, let them work out the kinks and then imitate what they do. Companies that do this are referred to as ‘fast followers.’

“The fast follower strategy typically works quite well and it doesn’t cost you as much and you don’t have the pain and the costs of learning,” said Rowan Saunders, Economical Insurance’s president and chief executive officer as part of a panel at InsurTech North in Toronto, which included Rino D’Onofrio, head of RBC Insurance’s Canadian insurance business, and moderator Jennifer Reynolds, Toronto Finance International president and CEO.

There’s also the question of cost-benefit that factors into being first or second. “What’s the prize of innovation?” Saunders asked. “Traditionally, in a mature market like ours, it isn’t that clear.”

Developing the kind of culture to allow for such thinking can be a competitive advantage. Since businesses can copy systems and processes, it’s the people who become key.

“It’s all about culture. The only sustainable competitive advantage any company has is their culture,” D’Orofrio said.

It takes the right tone from the top, however, to make it successful. “You have to have a leadership group that is convinced you got to innovate. So you have to champion that as a CEO and with your leadership team,” Saunders said.

Such a change doesn’t happen easily or quickly. Many of the large insurance companies have been around for such a long time that many legacy systems and legacy management styles are deeply entrenched.

These systems can’t do the things you want compared to something state of the art, Saunders said. Legacy management, meanwhile, is typically risk-averse.

“It may sound like an excuse but I think some the large insurance companies have some legitimate challenges in terms of moving fast with innovation,” he added.

It’s also important for the leaders to get out of their own way sometimes and push decisions on to someone else so that innovative ideas aren’t being met with a bottleneck waiting for approval.

“Sometimes that’s not easy. But you need to do that in order to not slow things down,” D’Onofrio said.

As things move at a faster pace, agility is key. A company set in its ways may not be as nimble as it needs to be. Some may argue that the key to a company lasting so many years is its ability to pivot as needed – but never has the pace of change been as quick as what’s seen today.

In fact, Saunders told the 300 people in attendance, each department needs its own level of agility. Things work differently from one area to the next, so implementing a plan with one group may not work the same as with another.