The research was conducted by OnePoll on behalf of MORE TH>N, involving 1,000 motorists aged 17 to 25, RSA Group noted in a press release on Thursday. The survey found that almost two thirds (61%) of drivers aged 17 to 25 understood emoji road signs better than the real world equivalents, but only over a third (37%) would welcome emoji road signs on Britain’s highways and byways. 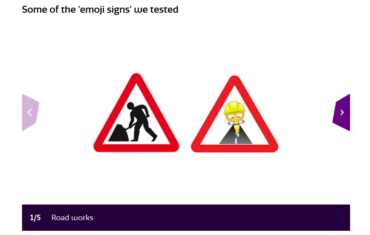 For the test, researchers selected 12 real road signs and designed emoji equivalents. Young motorists were then asked to correctly identify the meanings of both the authentic signs and the mock emoji symbols.

For seven of the 12 (58% of) signs, the emojis were better understood by young motorists than the real life road signs, with comprehension for the emojis most pronounced for signs depicting zebra crossings, ring roads, no bicycles and steep hills. And 7% of young drivers thought the sign for a ring road meant ‘carbon neutral’ road, the release noted. 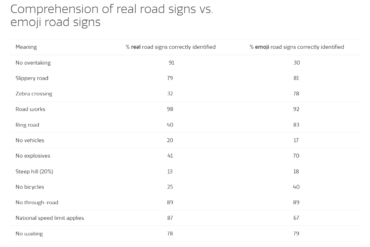 “Of all young drivers polled, a shocking 68% were unable to correctly identify the real road sign depicting a pedestrian crossing,” the release said. “Additionally, 80% could not place the sign for ‘no vehicles’, 60% answered incorrectly when asked what the sign for a ring road was, and three quarters (75%) incorrectly identified the meaning for the ‘no bicycles’ road sign.”

The majority of young drivers (63%) see no place for emojis on Britain’s road signs, believing they are too frivolous for such an important role (85%), could be confusing for older drivers (49%) and would actually encourage use of mobile phones (33%) behind the wheel. Conversely, one in three (37%) would actually like to see the government introduce updated road signs that are more akin to emojis, believing the long-used signs and symbols in existence to be confusing and ambiguous in meaning, the release said. A total of 72% of these respondents believed emoji road signs would be easier to understand, while half (53%) thought they would improve road safety. 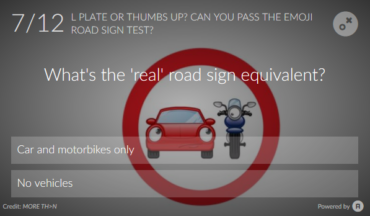 “Emojis have changed the way the younger generation converses, so it’s understandable they can comprehend these symbols with ease,” said Kenny Leitch, director of telematics for MORE TH>N, in the release. “However, emojis have no place on our roads. Thankfully, there is little prospect of official road signs ever becoming like emojis, but we still find ourselves in a situation where a significant number of young drivers do not understand the meaning of authentic road signs.”