REGINA – The Saskatchewan Court of Appeal has set aside a temporary injunction that halted a lawsuit filed by some parents of those who died in the Humboldt Broncos bus crash.

Sixteen people were killed and 13 were injured when an inexperienced truck driver went through a stop sign and into the path of the junior hockey team’s bus at a rural intersection near Tisdale, Sask., on April 6, 2018.

A few months after the crash, a lawsuit was brought by the families of five who died.

But a lawyer for a proposed class-action lawsuit by other families argued successfully last year that the original lawsuit should be put on hold until the court decides whether or not to certify the class action.

In a decision released Tuesday, the Court of Appeal ruled the judge who granted the temporary injunction made an error.

“The effect of the stay is significant. It bars completely their access to the court – a right that is not to be lightly interfered with,” wrote Justice Robert Leurer.

“I reject the characterization of the stay order as having only a trifling or limited effect on the ability of the plaintiffs to prosecute their action.” 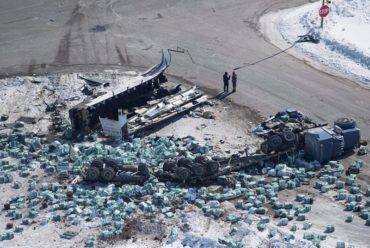 Leurer said there is no reason why the court should rule in favour of the class action over the original lawsuit.

“This is not a case where that party has a small or trifling claim.”

He said although the stay was meant to be temporary and would have expired after certification was decided, it may have led to a lengthy delay.

“A stay is inappropriate without considering the financial and psychological consequences,” he wrote.

“This is not a situation where that party can be said in any way to be seeking to abuse the court’s processes by pursuing an individual action in the face of a proposed class action.”

It names as defendants the truck driver, the Calgary-based company that employed him, the bus company and the Saskatchewan government.

The class action lists as defendants the Saskatchewan government, the truck driver and his employer.

Lawyer Kevin Mellor, who represents the original litigants, said the ruling is a relief but his clients lost valuable time.

“They’ll be happy that the decision went their way and they can proceed with their lawsuit,” he said.

“But they suffered a tremendous amount the last two-and-a-half years from the delay and hopefully they can get back on track and start litigating the case.”

Mellor said the next step will be to deal with the original application from the government of Saskatchewan which has asked to be removed from the lawsuit. That could be heard in the next six months.

“My clients want to get it going as soon as possible before witnesses pass away and Sidhu leaves the country which I believe is inevitable,” Mellor said.

“The delay has really hurt them significantly, psychologically, emotionally, financially.”

Other lawsuits related to the crash were also filed. John Rice, a Vancouver lawyer working on the class action, said in an email that he accepts the court’s decision and will not be appealing the ruling.

“Apart from the Herold litigants, all the other individual claimants collectively agreed to pause their lawsuits pending the outcome of the proposed class action’s application for certification,” said Rice, who noted the certification hearing was held in April.

Although duplicate proceedings are generally undesirable, the appeal court judge said, they are not prohibited.

“There are many circumstances in which, in the balancing of the competing interests, they are permitted. This is one such case.”

Jaskirat Singh Sidhu, the trucker who caused the crash, was sentenced to eight years in prison after he pleaded guilty to dangerous driving charges. In July, he was granted day parole for six months.

– By Bill Graveland in Calgary

Feature image: A memorial for the fatal bus crash involving the Humboldt Broncos hockey team at the intersection of Highways 35 and 335 near Tisdale, Tuesday, October 27, 2020. The Saskatchewan Court of Appeal has set aside a temporary injunction preventing a lawsuit filed by a group of grieving parents, in the aftermath of the deadly crash, from going ahead.THE CANADIAN PRESS/Liam Richards