An auto bodily injury ruling described as favourable to insurers is now officially in the books, as the Supreme Court of Canada rejected leave to appeal Thursday.

The initial Court of Appeal for Ontario ruling, which now stands, was “very positive for defendants and insurers” because it “reduces the likelihood of plaintiffs receiving double recovery and being overcompensated,” Brian Sunohara, a litigation lawyer for Rogers Partners LLC, wrote in a paper, titled Two Impactful Court of Appeal Decisions Affecting Auto Claims, published in September 2017.

Kossay El-Khodr was driving a tow truck Jan. 9, 2007 when his truck was rear-ended by a truck driven by Raymond Lackie, owned by John McPhail, and insured by Northbridge Commercial Insurance Corporation.

El-Khodr was catastrophically impaired and “liability was admitted” by the time of a personal injury lawsuit trial in 2015, as Ontario Court of Appeal Justice Jean MacFarland noted in a decision last year. El-Khodr was initially awarded $2.9 million by a jury of the Ontario Superior Court of Justice. 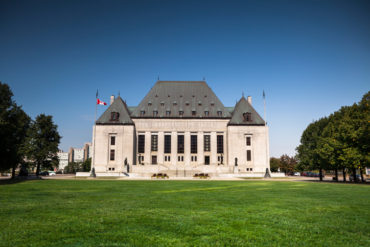 Though liability was not contested, the defendants appealed several findings.

Of the $2.9 million initially awarded to the plaintiff, $424,550 was for future professional services including physiotherapy. An additional $82,429 was for future medication and assistive devices.

The Court of Appeal for Ontario agreed in its ruling in El-Khodr v. Lackie, released Sept. 19, 2017.

The Supreme Court of Canada announced June 7, 2018 that it will not an appeal from El-Khodr, who had applied for leave to appeal to Canada’s highest court.

In its ruling released in 2017, the Court of Appeal for Ontario found that the trial judge, Justice Giovanna Toscano Roccamo, should have ordered El-Khodr to make an assignment to the defendants’ insurer in relation to jury’s awards for the cost of future medication and assistive devices as well as future professional services.

The Court of Appeal for Ontario cited Section 267.8 (9) of Ontario’s Insurance Act. In essence, among other things, the law stipulates that when an auto accident claimant is awarded damages in a bodily injury lawsuit, the claimant must assign to the defendant all benefits received from accident benefits insurers after the trial, in respect of health care.

The rational is that “a plaintiff should not recover twice for the same kind of loss arising from the same incident,” Justice MacFarland wrote.

In its 2015 ruling, the jury did not break down the health care costs awarded to El-Khodr into categories such as physiotherapy. Justice Toscano Roccamo reasoned that when deductions are made from tort awards, those deductions should not be “based on uncertainty and speculation.”