How an engineer failed to spot a major basement water problem

Three months after Edward Kent and Teresa Tomsky bought their Edmonton home, they noticed a musty smell in their basement.

It turns out a foundation crack, which they were led to believe was minor, was actually quite serious. The foundation was deteriorating because water was coming in through it.

In Kent v. MacDonald, released Aug 28, Justice Anna Loparco of the Alberta Court of Queen’s Bench awarded Kent and Tomsky $113,000. The court found both people who sold them their home – and a structural engineer hired by the sellers –  were 25% and 75% liable respectively.

Home inspectors in Canada often have no training in assessing basement flood risk, officials with the Intact Centre on Climate Adaptation have said earlier in a different context. The Intact Centre is not a party in Kent. v. MacDonald and was not commenting on the case.

An inspector that Kent and Tomsky hired did notice a horizontal crack in the basement wall of the home in May of 2010. That was about six weeks before they closed the sale. The buyers’ inspector recommended they get further evaluation by a foundation repair contractor. 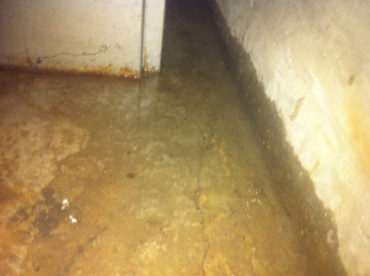 The buyers did not sue their home inspector, but they did sue the people who sold them their home along with the structural engineer hired by the seller.

The sellers offered to hire a structural engineer based on the assumption that an engineer could provide an unbiased opinion because the engineer would not have an incentive to obtain further restoration work.

The engineer hired by the sellers produced a short report saying the home was structurally sound. No mention was made in his report of the crack that had already been discovered. The buyer’s home inspector could not examine the entire foundation wall because some of it was concealed by drywall. After the buyers pressed the sellers’ engineer for further information, the engineer told them it was not necessary to remove drywall to do any further inspection. The engineer recommended that the slope around the foundation be re-graded over the next few years.

In defending the lawsuit, the structural engineer argued there is a difference between providing an opinion on structural integrity and on whether there is water ingress. The engineer also pointed out he was working for the sellers and not the buyers.

But without looking at the portion of the foundation that was behind the drywall, Justice Loparco found that the engineer hired by the sellers could not ensure that his conclusions on the structural integrity of the foundation were accurate. Therefore, she found the inspection did not meet the standard of care expected of a structural engineer who was retained specifically to examine a crack in the foundation, provide a technical analysis of the problem, and discuss the risks over the short and medium-term.

Home insurance normally does not cover normally cover seepage, but it would cover water damage arising from sudden and accidental bursts of pipes. Home insurance is not meant to address maintenance problems.

In the case of Kent and Tomsky, the couple did not know when they agreed to buy the home in 2010 about a report the sellers had received four years earlier. That report, which was produced after Kent and Tomsky filed their lawsuit, observed that there was concrete spalling present in the basement. Spalling is when concrete breaks apart into pieces of rubble and loose stones.

Consequently, Justice Loparco found that the sellers breached a warranty in the contract, which says that “except as otherwise disclosed, the Seller is not aware of any defects that are not visible and that may render the property dangerous or potentially dangerous to occupants or unfit for habitation.”

The plaintiffs had to move out for part of the time that their home was being repaired. Shortly after discovering the musty smell in their basement, they discovered mold.

Kent and Tomsky found out about the spalling in 2011, about a year after they bought the home. That was when a contractor they hired removed drywall, exposing the south and west foundation walls. The new owners then hired a different engineer, Konstantin Ashkinadze, who visited their home, did some inspection and gave them two options for ways of doing major repairs to the foundation.

Testifying as an expert witness for the plaintiffs, Ashkinadze told the court that the foundation was disintegrating due to severe water damage. He had recommended replacing the foundation.

Ashkinadze said in a report for the plaintiffs that the ground immediately adjacent to the home slopes very noticeably towards foundation,  the sidewalk had settled 6 to 7 inches, and all water collecting outside is funneled towards a corner of the home.

Ashkinadze told the court what he would have done if he had inspected the home. First, he would have noted whether there was an issue with the grade of the home on the west wall.

“Second, he would have inspected all of the other walls, which in his opinion, would have revealed the presence of mold, although he conceded in cross-examination that it could have formed after the sale,” wrote Justice Loparco. “Third, he would have measured the levelness of the main floor.”

It was not clear what instruments, if any, the sellers’ engineer used to measure the walls, wrote Justice Loparco.

The sellers’ engineer said he walked the perimeter of the home outside and then went inside and inspected the walls for cracks. In the basement, he notice the horizontal crack behind an access panel but it did not concern him because the wall was plumb and there was no bowing or fracture that would have indicated  a structural problem.