How these independent claims adjusters lost their jobs

Some employees of Canadian independent adjusting firms have been shown the door due to bad behaviour that the #MeToo movement is bringing to the forefront, company CEOs said at the recent Canadian Claims Summit.

In terms of harassment in the workplace, it is not tolerated, said Pat Van Bakel, president and CEO of Crawford & Company (Canada) Inc. on Tuesday during the Canadian Claims Summit. 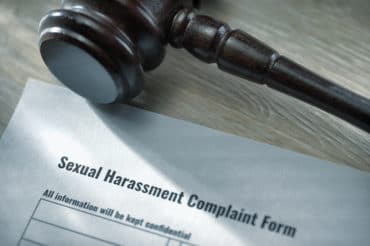 “We are not immune to it,” Van Bakel said during a Town Hall of independent adjuster presidents and CEOs. “We have had executives that we have had to exit from the organization for behaviours that just didn’t fit with the culture of the organization.”

Van Bakel was responding to a question about how speakers are addressing and seeing the effects of the #MeToo movement. He did not name the former employees, specifically state they were with Crawford’s Canadian subsidiary or go into detail on the behaviour that led to their departure.

The #MeToo movement is intended to raise awareness of sexual misconduct. Labour and human rights legislation stipulates that harassment violates workers’ rights. Harassment is not necessarily criminal behaviour but encompasses a wide range of misconduct.

During the Town Hall at Tuesday’s summit, Van Bakel reiterated Crawford’s “zero tolerance” policy for such behaviour. He was not the only executive at the Town Hall to address instances of inappropriate behaviour in the claims context.

“We have had two incidents since the early 90s,” said Patti Kernaghan, president and CEO of S.J. Kernaghan Adjusters Ltd, which has had a  a “zero-tolerance” policy for harassment in the workplace since the mid-1990s. “We had to enforce that a couple of years ago with the exit of an adjuster in one of our offices.”

Kernaghan did not name the former adjuster, or go into detail about the behaviour that led to the person’s departure.

The all-day Canadian Claims Summit was held near the Metro Toronto Convention Centre and hosted by the Canadian Independent Adjusters’ Association. Also speaking on the Town Hall was Lorri Frederick, president of SCM Insurance Services Ltd.’s ClaimsPro unit. She recalled that when she became an independent adjuster “20-something years ago, let’s face it, it was a boys’ club.”

The #MeToo movement is about “zero tolerance” for harassment and the “ability to come forward” if someone is violating a code of conduct, Frederick said. “It’s also about elevating equality in our business and making sure we have the right people in the right jobs and everyone is being treated fairly every day.”

The federal government defines workplace harassment in the workplace as conduct that the perpetrator “knew or ought reasonably to have known would cause offence or harm,” including “unwanted sexual advances.”

In Ontario, occupational health and safety legislation requires provincially-regulated employers to have a workplace harassment policy. Sexual harassment could include “unwelcome solicitation or advances from a manager, supervisor or another person who has the power to reward or punish the worker,” the Ontario Ministry of Labour explains on its website.

Workplace harassment could also derogatory comments about a person’s race, religion, gender, sexual orientation or against people who are transgender.

Sexual assault is more severe because it is a criminal offence. In Canadian law, the criminal definition of sexual assault is very broad and includes “all unwanted sexual activity,” the Women’s Legal Education and Action Fund (LEAF) reports. The Criminal Code stipulates that it is not consent if a person’s agreement to sexual contact is “a result of a someone abusing a position of trust, power or authority,” LEAF notes.

More News
Related
Why mutuals partner with independent adjusters
Tornado damage: View from the ground
Claims adjuster fined $4,000 for failing to properly inform insured about coverage
Why marijuana plant value is so important for adjusters

1 Comment » for How these independent claims adjusters lost their jobs