VANCOUVER – A protracted court battle over a gold, diamond-studded eagle statue has landed in favour of a major insurance company, which will now be allowed to challenge a claim over the treasure that was allegedly stolen in the Vancouver area nearly three years ago.

Justice Robin Baird of the British Columbia Supreme Court overturned a default judgment against Lloyd’s Underwriters, saying the insurer has a substantial defence against a company called Forgotten Treasures International and its president Ron Shore.

Lloyd’s, which was ordered last December to pay out a claim against the eagle, argued Shore violated the terms of a policy involving the statue, which was encrusted with 763 diamonds, weighed eight kilograms and was appraised at $930,000. 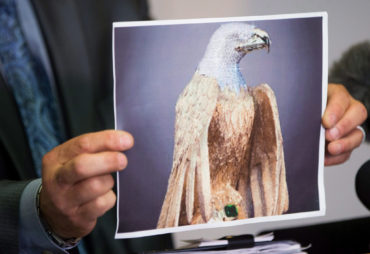 A Delta, B.C. police officer holds a photograph of an 8-kilogram solid-gold, diamond-encrusted statue of an eagle that was stolen from Ron Shore during a 2016 robbery. THE CANADIAN PRESS/Darryl Dyck

“The plaintiff’s decision to take default judgment was ill-advised but it falls short of reprehensible conduct worthy of chastisement or rebuke,” Baird wrote in his ruling, which also lists two other insurance companies as defendants.

It says the eagle was supposed to be the main prize as part of an international treasure hunt Shore operated to raise money for cancer research.

The eagle was allegedly stolen by “unknown assailants” on May 29, 2016, when Shore was putting a knapsack containing the statue in the trunk of his vehicle following a promotional event in Delta, B.C., the ruling says.

Lloyd’s denied Shore’s claim, saying he breached the terms of a policy by transporting the eagle without a designated employee or representative at all times except when it was deposited in a bank safe or vault.

Shore filed a notice of civil claim in May 2018, alleging breach of contract and failure to investigate the claim in a timely manner, breach of duty as well as negligence by an adjuster.

Baird said that by the time Lloyd’s was served with the lawsuit, it had already interviewed a woman who accompanied Shore out of a venue in Delta and established she was a friend, not a designated employee or representative, and that she had driven away in her own vehicle when the alleged robbery occurred.

Lloyd’s had not wilfully and deliberately failed to respond to Shore’s civil claim, he wrote, adding Shore was not required to provide meet the insurer’s “tactical demand” for more information about the allegations, which he said were not frivolous but may ultimately be difficult or impossible to prove.

“In my view, default judgment should not have been sought or taken,” he said. “Communications between the parties had made it perfectly clear that there was an active, ongoing dispute between the parties with a substantial defence forthcoming, and not one that was merely worthy of investigation, but one which had been communicated clearly and precisely.”

Baird ordered Lloyd’s to file a response to Shore’s civil claim within 21 days and said each party must pay its own costs.