The lawsuits are connected to Ronald Leger, a former pastor at Holy Family Parish in Winnipeg.

He pleaded guilty to sexually abusing three boys ranging in age from nine to 18 between 1980 and 2004. 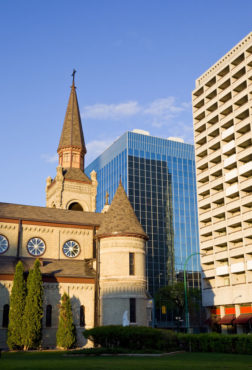 Leger was given a two-year prison sentence in February.

The lawsuit alleged that the Archdiocese was “negligent and failed in its duty” to the victim “to recognize that a certain percentage of priests would become sexually deviant.”

The lawsuit claimed the Archdiocese took no action to stop the behaviour, or protect the victim, and instead took steps to cover up the behaviour.

Robert Talach, a lawyer from London, Ont., said his two clients have endured years of suffering because of the abuse.

“This is something they struggled with over the years,” he said. “You try and put it away, you try and move on but it always rears its ugly head.”

Talach has represented victims who claim sexual abuse by clergy for over a decade. He said the lawsuits are about pushing for awareness and change.

“We may learn about early awareness and failure to intervene, and hopefully financial loss will make change for the future,” he said.

According to Talach, the civil litigation process will lead to a broader examination of the facts, “including any involvement of the diocese and the religious order of the clerics as well,” he added.

The Archdiocese of Saint Boniface said it cannot comment on the specifics of the case, because it is before the courts.

Archbishop of Saint Boniface, Rev. Albert LeGatt, said the Archdiocese would have more to say once the court case has been resolved.

“We’ve tried to do everything that is right when it came to our attention,” LeGatt said.

Leger became pastor at Holy Family Parish in 1995. LeGatt said when the allegations first came forward Leger was initially temporarily suspended before he was fired.