Right of way at roundabout debated in cyclist’s injury lawsuit

A pickup truck driver who was hit by a bicycle in a roundabout is 100% liable for the accident, a British Columbia judge ruled in a decision released today.

Cyclist Javad Behragam is suing Peter Paviglianiti as a result of a collision that happened in Vancouver at the uncontrolled intersection of Birch Street and West 10th Avenue on Sept. 23, 2013.

Behragam was knocked out and suffered brain injury.

Behragam was riding his bike west on West 10th Avenue. Peter Paviglianiti was driving his pickup truck south on Birch Street. Those roads meet at a roundabout, with a raised circular median, 6.2 metres in diameter, at the centre of the intersection (pictured). The collision happened in the northwest quadrant of the intersection. 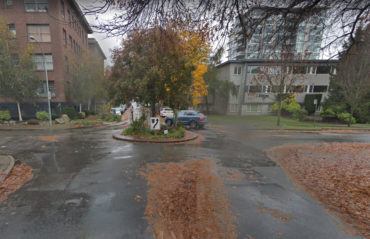 The B.C. Motor Vehicle Act stipulates that if two vehicles approach or enter an intersection at about the same time and there are no yield signs, the driver of a vehicle must yield the right of way to the vehicle that is on the right of his or her vehicle.

Paviglianiti was approaching the roundabout intersection from Behragam’s right – meaning that Behragam would normally have to yield.

But the statutory right of way is not absolute, Justice Emily Burke wrote in Behragam v Paviglianiti.

“The right of way becomes subject to the reasonable and substantial prior entry of that vehicle into the intersection,” wrote Justice Burke. Her ruling was not on  how much Paviglianiti owes Behragam in damages but only on who is at fault.

A key question was whether Behragam was the “dominant” driver and therefore not obliged to wait for Paviglianiti.

Even though Paviglianiti had the initial right of way, he became the “subservient driver” when Behragam entered the intersection on his bike, Justice Burke ruled.

One point of contention was the definition of intersection. Paviglianiti argued the intersection of West 10th and Birch should be defined as a circle with a 16-metre radius.

Behragam used the Motor Vehicle Act definition of intersection, which is “the area embraced within the prolongation or connection of the lateral curb lines, or if none, then the lateral boundary lines of the roadways of the 2 highways that join one another at or approximately at right angles, or the area within which vehicles travelling on different highways joining at any other angle may come in conflict.”

Justice Burke was not convinced that she should accept the defendant’s broader definition of intersection. She found that Behragam was in the intersection first and that Paviglianiti was focussed on traffic coming from the west, or from his right. Paviglianiti may have glanced left but it was more likely he just relied on his peripheral vision, Justice Burke found.