Did settling soil or sudden water leak cause this home damage?

A disputed home insurance claim could go to trial because the carrier has accessed 22-year-old court records from the claimant’s divorce.

In September, 2009, Douglas Cotter noticed the patio along the front of his Penticton, British Columbia home had shifted. Then over a few days, cracks appeared in the patio, garage floor and sub-basement wall. Also, some doors shifted, Justice Diane MacDonald of the Supreme Court of B.C. noted in Cotter v. The Dominion of Canada General Insurance Company, released Sept. 5. 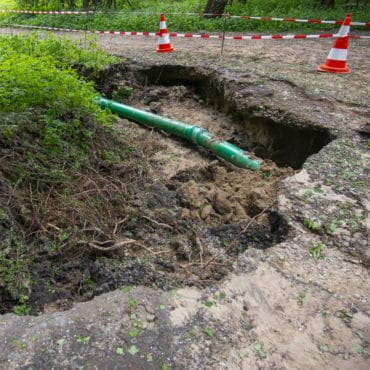 (The Dominion was acquired  in 2013 by The Travelers Companies Inc.)

Cotter argued The Dominion should pay because the policy includes coverage for “sudden and accidental escape of water from a sprinkler system.” Carter had dug below the patio and found a connection between a water line from the home and the irrigation feed intake had broken. Cotter also hired an engineering company, which concluded it is likely that soil collapsed as a result of a leaking irrigation line.

The Dominion said even if the exclusion for settling does not apply, then an exclusion for continuous or repeated water leakage (as opposed to sudden and accidental leakage) would apply.

Justice MacDonald ruled that the dispute cannot be settled by summary trial, in which case a judge would decide based mainly on documents. Instead, the dispute must go to a conventional trial, she ruled.

The Dominion noted that in a divorce trial in 1996, Cotter said the same home had “significant erosion and settling problems.”

Bu during examination for discovery for his disputed claim from 2009, Cotter “testified that he was not aware of any cracking or settlement issues on his property between 1986 and 2006,” Justice MacDonald wrote.

She said it is possible that the damage was in fact caused by sudden and accidental escape of water. But she declined to make a finding on the matter, ruling that the issue should go to trial because witnesses will have to appear in person and be cross-examined.

More News
Related
Insurer seeks leave to appeal $8.5-million award in disputed construction claim over defects exclusion clause
Supreme Court of Canada will not hear appeal from insureds seeking replacement cost instead of actual cash value in fire claim
Court upholds fake gun exclusion, but not because they are illegal
Exclusion clause for ‘conversion’ in comprehensive auto policy ‘does not come close’ to being easily intelligible: Court

1 Comment » for Did settling soil or sudden water leak cause this home damage?