The Canadian corporate owner of nearly 13,000 convenience stores and gas stations is warning it could be sued as a result of selling cigarettes.

Alimentation Couche-Tard Inc. “could be sued for health problems caused by the use of tobacco products,” Laval, Quebec-based Couche-Tard said recently in a securities filing.

Couche-Tard, a ubiquitous convenience store brand in Quebec, did not say it is actually being sued. Instead, Couche-Tard suggested that tobacco liability could affect future financial performance. It is standard practice for publicly-traded companies to discuss business risks when releasing year-end financial results.

Couche-Tard operates about 2,200 convenience stores in Canada. Its Canadian brands include Circle K, Becker’s and Mac’s, the latter of which are being renamed Circle K. 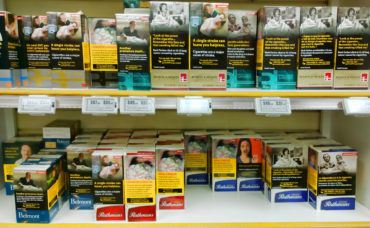 Some brands of cigarettes are made exclusively for Couche-Tard, the firm said July 9 its management discussion and analysis of its financial results for the year ending April 29.

About 38% of Couche-Tard’s merchandise sales are from tobacco products.

“Various health-related legal actions, proceedings and claims arising out of the sale, distribution, manufacture, development, advertising and marketing of cigarettes have been brought against vendors of tobacco products,” Couche-Tard added.

Forty-six American states signed a master settlement agreement with some tobacco firms in 1998, valued at US$206 billion, the California attorney general’s department notes in its website.

On this side of the border, the Ontario government filed a $50-billion lawsuit in 2009 against several tobacco firms, in the hopes of recovering the cost of treating tobacco-related illness.  Defendants in that case, which is still before the courts, include Imperial Tobacco Canada, Rothmans, Benson and Hedges, Philip Morris International, Altria Group, JTI-MacDonald, R.J. Reynolds.

A ruling in a similar case, Her Majesty the Queen in Right of British Columbia v. Philip Morris International Inc. is scheduled for release Friday by the Supreme Court of Canada.

In 2015, Justice Nathan Smith of the Supreme Court of B.C. ordered the B.C. government to disclose to Philip Morris data on patient health records with the names of patients removed. That order was upheld on appeal in a ruling released Feb. 14, 2017. The Supreme Court of Canada heard Jan. 17 an appeal by the B.C. government, which argues that providing individual healthcare data to a defendant poses a privacy risk, even if personally identifiable information is removed.

Philip Morris argued that producing the data “poses no threat to privacy” and that the province intends to use the same data to prove its case.

In siding with Philip Morris, the B.C. Court of Appeal found that the data sought by Philip Morris is “highly relevant” to the lawsuit.

The Supreme Court of Canada announced July 9 it will release its decision at 9:45 a.m. July 13. The appeal is over the production order and not on the merits of the lawsuit.

In addition to its Canadian stores and gas stations, Alimentation Couche-Tard operates about 7,800 convenience stores and gas stations in the U.S. and nearly 3,000 in Europe. It reported nearly US$13 billion in revenues for the year ending 29 April. Its founder and executive chairman Alain Bouchard, started his first convenience store in Quebec in 1980.

More News
Related
Court of Appeal for Ontario clears way for misrepresentation lawsuit against directors and officers arising from take-over bid circulars
Invasion of privacy class-action against Equifax proceeds in Ontario
Workplace harassment policies should include non-employees, risk manager says
Why this insurer is ‘shrinking’ its D&O liability business